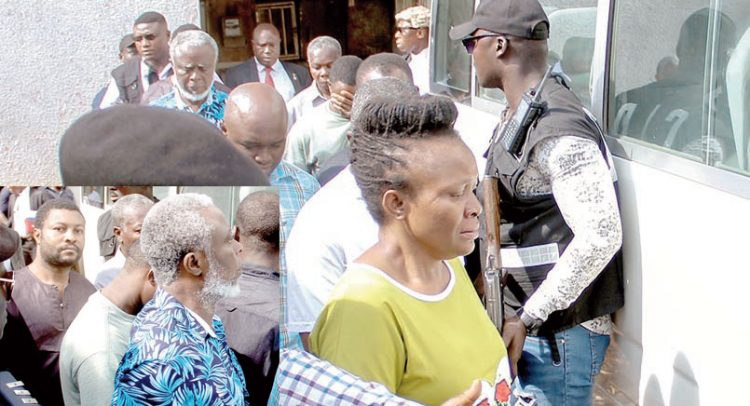 SOME NINE persons, who were recently arrested for allegedly planning to attack the Presidency and destabilize the country, have been charged with treason felony.

The nine persons — including three civilians and six military officers — are being accused of planning to usurp the executive powers of the state.

Subsequent to their plans, they are alleged to have hired the services of a local gun manufacturer to produce explosives, guns and ammunition, with which they intended to carry out their plans.

The accused persons are alleged to be members of a non-governmental organization — Take Action Ghana (TAG) — formed by Frederick Yao Mac-Palm, a medical doctor, and proprietor of Citadel Hospital at Alajo, Accra.

A civilian employee of the Ghana Armed Forces, Gershon Akpa, who is a weapons mechanic, is alleged to have agreed to sell two guns to the ‘coup doctor’ at a cost of GH¢7,000. He took GH¢2,000 part payment but returned the money later because he could not supply the guns.

The civilians, who have been accused, are Dr. Frederick Yao Mac-Palm, a doctor and the alleged mastermind behind the coup plot; Donya Kafui aka Ezor, a local weapon manufacturer (blacksmith) from Alavanyo; and Bright Allan Debrah Ofosu, aka BB or ADC.

The nine accused persons are facing a total of four different charges. The military officers are each facing a count of conspiracy to commit crime namely treason felony.

There was a new development in the case as two of the military officers who were initially remanded by the court were discharged.

The two were, however, discharged as the prosecution withdrew the charge sheet which contained their names, which were not included in the new one.

No reason was given by the prosecution for their discharge.

The accused persons were remanded by the court presided over by Her Worship Rosemond Agyiri at the request of the prosecution.

This was after over an hour of argument between the defence team and the prosecution about the jurisdiction of the court to handle an indictable offence.

He alleged that the police decided to bring the accused persons to the District Court as a ploy to punish “this innocent accused persons by keeping them in custody to go and fish for evidence.”

Another lawyer, Agambiri, who represented WO II Esther Saan, said his client was being maltreated in the custody of the Bureau of National Investigations (BNI) and prayed the court to grant her bail.

This position was vehemently objected to by the prosecution led by ASP Sylvester Asare who stated that the charges were offences triable by indictment, and in such instances the District Court is the appropriate court for the accused persons to be sent since it is the court where committal proceedings are held.

He, therefore, opposed the assertion that the court does not have jurisdiction over the matter and also debunked claims that the whole case was a set up to punish the accused persons.

Presiding Magistrate Rosemond Agyiri in her ruling held that the charges were indictable offences and the first port of call was the Magistrate Court, thus giving her jurisdiction over the matter.

As to the issue of bail, she said due to the charges, she does not have jurisdiction to grant bail in such matters and, therefore, urged the lawyers to take steps to secure bail for their clients at the High Court.

She, therefore, remanded the civilian accused persons in police custody and the military officers in the custody of the Ghana Armed Forces.

The Kaneshie Court in Accra was yesterday virtually taken over by the relatives of the accused persons as well as members of the public who thronged the court.

Some relatives of the accused persons shocked the audience when they poured libation after the court proceedings “against false witnesses.”

Others could not hold their tears as they wailed when they saw their relatives being escorted into the police vehicle.