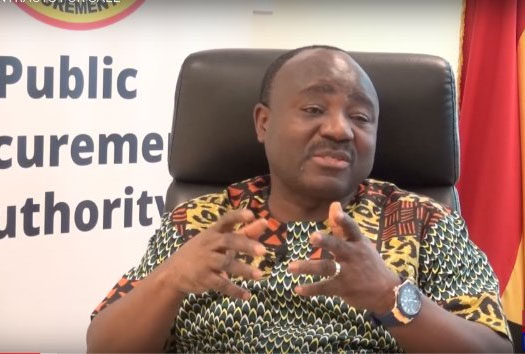 A number of Civil Society Organizations (CSOs) fighting against corruption have demanded what they termed as substantive action in the alleged sale of contracts at the Public Procurement Authority (PPA).

The call follows the suspension of the Chief Executive Officer (CEO) of PPA, Adjenim Boateng Adjei over alleged procurement misconduct.

President Nana Akufo-Addo after suspending the PPA, referred the matter to the Special Prosecutor (SP) and the Commission on Human Rights and Administrative Justice (CHRAJ) for investigation.

Mr. Adjei is alleged to be a shareholder and director of TDL, presenting a case of a referee and player at the same time.

Mr. Azure Awuni reported that the company was engaged in selling contracts.

Undercover encounters with the General Manager of the Company, Thomas Amoah, revealed that the company was selling a GH¢ 22.3 million road contract to K-Drah Enterprise, a fake company Manasseh used for the investigation.

This contract was awarded to B-Molie Limited, a company Mr Amoah said was a sister company of TDL.

As per Section 38(1) of the Public Procurement Act 2003 (Act 663) as amended Act 2016 (Act 914), restricted tender can be undertaken only under the following circumstances; Specialized and complex procurement
Cost and time of the process and the cost of the project are not commensurate.

But the CSOs stated that “sadly, the restricted tender approved contracts mentioned in the documentary do not fall within any of the above conditions; a clear violation of the Act.”

“To demonstrate real commitment by President Nana Akuffo Addo and his government to the fight against corruption, CSOs working against corruption are calling on his high office to; Further suspend the entire Board of the PPA pending investigations from the OSP and CHRAJ.”

They said “the Board cannot be left blameless in this whole contracting saga as revelations made in the said documentary raises serious concerns about the Board’s understanding of the Conflict of Interest injunction imposed by Article 284 of the 1992 Constitution and how to manage it.”

“Additionally, the Board’s oversight or possible complicity in the possible abuse of the restricted tendering rules requires them to step aside for a thorough investigation to be completed.”

They have also asked Government to “suspend the use of restricted tendering and single source processes while investigations are underway.

“Instruct all other investigative bodies not to initiate or trigger any parallel investigations to the OSP-CHRAJ probe, ” they said.