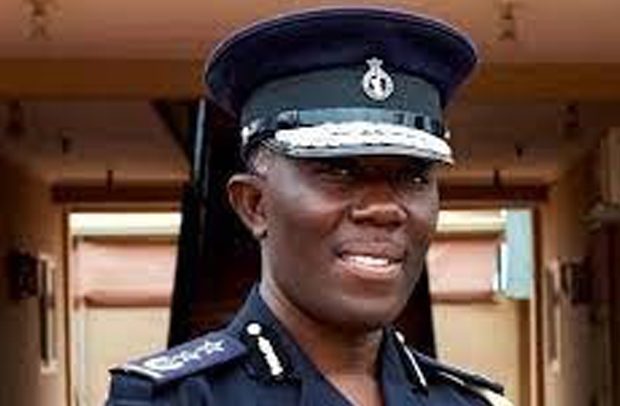 In a release signed by the Director of Communications at the Presidency, Eugene Arhin, the IGP/Mr. James Oppong-Boanuh has been directed by the President to proceed on his terminal leave with effect from August 1, 2021 pending his retirement from the Ghana Police Service (GPS) on Thursday, October 7, 2021.

In his place, the President has directed Commissioner of Police/Dr. George Akuffo Dampare, to serve as acting Inspector General of Police with effect from Sunday, August 1, 2021.

In another vein, the President has asked the Director General of the Prisons Service, Mr. Patrick Darko Missah, to proceed on terminal leave from Sunday, August 1, 2021, with his retirement from the Service set to begin on Saturday, October 16, 2021.

President Akufo-Addo has conveyed his gratitude to both the outgoing IGP and Director General of Prisons for their dedicated and meritorious services to the nation and to the Police and Prisons Services, respectively.

Dr. Dampare is the eighth youngest person to hold the position of Acting IGP since the country’s independence.

Speculations have been rife about who takes over from the outgoing IGP.

Dr. Dampare joined the Ghana Police Service (GPS) as a constable, aged 20, in 1990, having worked through the ranks over the years to reach the ultimate rank in the internal security agency.

As one of the leading recruits during his basic police training at the National Police Training School, Tesano, Accra, he turned out to be the best recruit and adjudged the overall best in his intake.

In 1996 while at the Police Academy, formerly Police College, in Accra, as a cadet officer for the 32nd Cadet Officers’ Course, he emerged the overall best cadet sweeping all the awards, including Excellence in Professional Police Subjects and Excellence in Academic Subjects.

With over 30 years in the Police as a career police officer, he has contributed immensely towards the development of the GPS.

He was once the Aide d’ Camp of then Vice President Prof. John Evans Atta Mills, during the Rawlings regime.

Dr. Dampare as the Greater Accra Regional Police Commander did well in helping to unearth those behind the gruesome murder of JB Danquah, the NPP MP for Abuakwa North.

Between 2010 and 2015, under the leadership of two IGPs, Messrs. Paul Tawiah Quaye and Mohammed Ahmed Alhassan, Dr. Dampare led and coordinated the ‘National Anti-armed Robbery Reward to Informant Initiative,’ which saw the arrest and prosecution of many notorious armed robbers across the country.

As the Director-General for National Operations, Dr. Dampare created an efficient system where fragmented units were consolidated to create effective and complete departments such as the establishment of an Anti-armed Robbery Unit (the COMBAT Unit) to aggressively fight robbery and other violent crimes. He also created the Intelligence Unit within the National Operations Department, which later informed the creation of a Police Intelligence Department at the national level.

As Accra Regional Police Commander, Dr. Dampare introduced an innovative and proactive policing strategy called the ‘Continuous Stakeholder Engagement Programme’ where the public were included and involved in policing the region.

For the first time, through this initiative, the Ghana Police Service under his leadership, visited political parties in their offices to engage them.

As Director-General in charge of Welfare, Dr. Dampare introduced an innovative social welfare scheme where he led officers from the department to visit the homes of scores of sick and bedridden police officers across the country, and also introduced strategic medical interventions to facilitate their wellness.

Still at Welfare, Dr. Dampare initiated a process at Dodowa and Kasoa to reclaim lands owned and paid for by police officers.

The matter had become a national security threat, as many officers were angry at the failure of the leadership of the police administration to intervene in the situation, which had lasted for close to a decade.

In 2013, under the leadership of the then IGP, Mr. Mohammed Ahmed Alhassan, Dr. Dampare led a team of officers, working day and night, to restructure the Armoured Car Squadron (ACS) Unit into the Formed Police Unit (FPU) within a record time of ten (10) weeks. This task had remained impossible for over fifteen years. The FPU has now become one of the police units undertaking internal police operations and international peacekeeping missions under the United Nations and African Union.

As the Director-General of the National Patrol Department (Police Visibility Department) and under the leadership of the then IGP, Dr. Dampare supervised the implementation of the novel ‘Police Visibility’ programme, which saw the presence of police personnel at most intersections and communities in Ghana.

Coordinator of the National Inter-Ministerial Task Force for the 2007 Ghana Floods, which was under the overall leadership of Dr. Mrs. Mary Chinnery-Hesse (then Chief Advisor to H.E. President J.A. Kufuor), Dr. Dampare led a team, within a seven-month period, to develop and implement a National Disaster Management Model, which brought all United Nations Agencies, Red Cross and Civil Society Organisations, among others, together, to successfully manage the disaster.

As Director-General for Finance, Dr. Dampare led a Police Technical Implementation Team to work with the Fair Wages and Salaries Commission, to migrate the Police Service onto the Single Spine Salary Structure as the first institution in the country to successfully complete the migration.

Still as Director-General for Finance, Dr. Dampare also introduced the payment of recruits’ allowances through the bank by getting them bank accounts as well as ATM cards, and also engaged the banks and got them to build ATMs at the Police Training Schools at no cost to the government.

Dr. Dampare led a team of officers to use mostly donations from the private sector to give a facelift to the Police Headquarters by constructing a Public Affairs building, the Integrity Square, the Police Fitness and Social Centre and a Helipad.

As Accra Regional Commander, Dr. Dampare raised sufficient capital from the private sector to complete a new office complex and re-roofed 90% of all office buildings at the Regional Headquarters which had been in a deplorable state for years.

Dr. Dampare has undertaken numerous law enforcement courses at tactical, operational, strategic leadership and management levels, making him an all-round police officer with the required skills and competencies commensurate with his rank.

Outside the Police Service, Dr. Dampare previously worked as a Research Fellow and Lecturer at King’s College London, University of London, having also lectured at the University of Cape Coast (UCC), Ghana Institute of Management and Public Administration (GIMPA), Regent University College and the Data Link University College. He is also one of the pioneer lecturers at the Business School of the Kwame Nkrumah University of Science and Technology (KNUST), Kumasi.