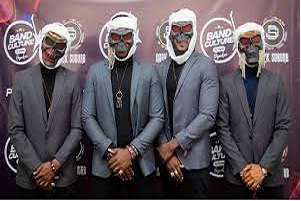 Dark Suburb, Ghana’s first alternative rock band, has been nominated in this year’s edition of the annual All Africa Music Awards (AFRIMA).

The band’s ‘Kelewele’ song, which was released late last year, has been nominated in the Best Artiste, Duo or Group in African Rock category.

Dark Suburb will be competing in the category with songs like ‘Peace In Limbe’ by Franck Biyong, ‘Structures’ by Rash, ‘Furukazi’ by Tetu Shani, ‘Beat Time’ by The Isomers.

AFRIMA is being organised in partnership with the African Union Commission (AUC) to reward and celebrate musical works, talents and creativity around the African continent while promoting the African cultural heritage.

Dark Suburb is an alternative rock band from Ghana that has adopted and refined a culture of masquerades in the continent as their image.

The band wears skeleton masks to highlight the point of our shared humanity and to remind the world that we are one people regardless of sex, race or social status.

The masks give the band a uniform identity and hides individual egos and differences just as they expect the people of the world to see themselves as an important unit in a big team working for a better world.

The members of the band are not known except the leader, referred to as ‘High Priest’. This is because they always perform behind the mask.

Formed some years back, the band has already garnered a good following and generated a large amount of curiosity among music lovers in Ghana and other parts of the world.

Since bursting onto the music scene in Ghana, the band has received nominations for several awards. Notable among them are the VGMA’s, 4syte MVAs, and AFRIMMA awards.

It has had the opportunity to share platforms with top local and international artistes such as Diamond Platnumz from Tanzania at the AFRIMMA 2016 held in Nigeria.