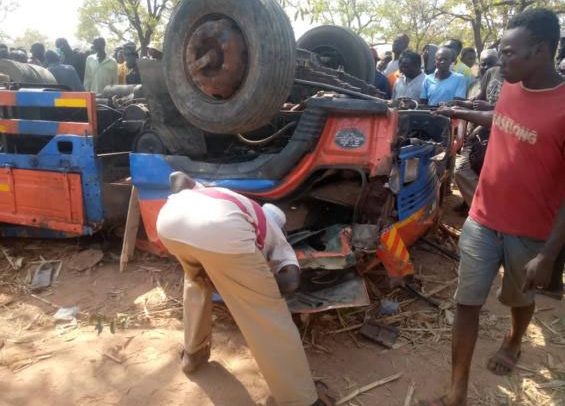 The Kia Rhino truck involved in the accident

Information gathered by DGN Online indicates that the death toll of mourners who were involved in an accident at Zuggo in the Savelugu municipality of the Northern region has risen from 13.

The Northern Region Crime Officer, Supt. Bernard Baba Ananga, who confirmed the incident to DGN Online said three other persons died at the Tamale Teaching hospital where they were on admission.

He disclosed that the deceased bodies have been handed over to their families for burial after postmortem was conducted on the bodies.

On Sunday, January 23,2022, a KIA Rhino vehicle carrying about 33 passengers on board returning from a funeral got involved in an accident at Zoggu on the Savelugu-Bolgatanga road in the Savelugu municipality.

About six passengers died on the spot and four later died at the Savulugu hospital.

Several passengers who sustained various degrees of injuries were sent to the Tamale Teaching hospital for treatment.

According to police, the accident occured when the driver in an attempt to avoid hitting a cyclist, lost control and somersaulted.

The Kia Rhino truck involved in the accident has been towed to the police station for further investigations.

Bawumia Is One Of The Brightest Stars In Africa – Jason Emert