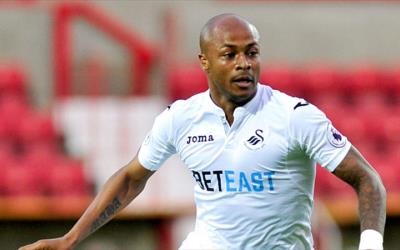 Ghana captain Dede Ayew has expressed worry over his side narrow loss to Leeds over the weekend in the Championship.

Swansea were hoping to grab all points when they hosted Leeds at the Liberty Stadium but an 89th minute strike by substitute Pablo Hernandez denied them.

“Tough one to take…team spirit was top… didn’t get what we deserved.”

Known for his mental toughness, he has, however, expressed hope and urged his teammates on, saying, ” We still in! We keep believing!”

The result has dented Swansea’s hopes of securing a playoff berth in the campaign.

It has also sunk them to seventh place with 63 points from 43 games, a point adrift of final playoff spot which is occupied by Cardiff City.

Dede has featured 41 times in all competitions with six assists and hit the back of the net 14 times.