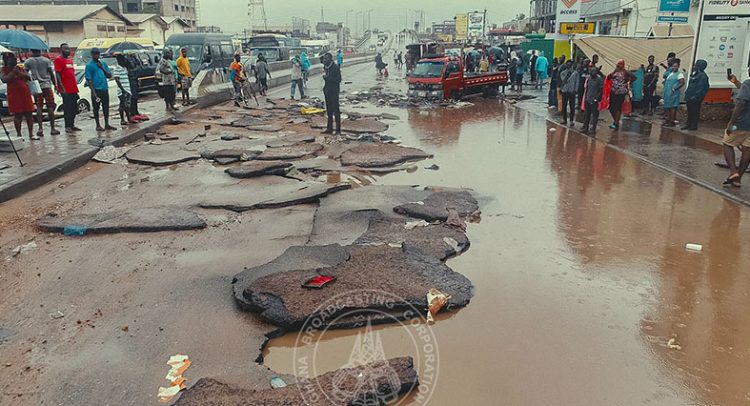 Residents of Accra thought Saturday’s downpour was the most destructive of the ongoing raining season until last Monday’s registered itself.

It reminded many of previous encounters with the extreme weather conditions, one of the characteristics of the global climate change.

The raining season comes with the apprehension about such days, past experiences informing the fears.

Those living in specific parts of the nation’s capital especially, know what to expect when the rain clouds post their ominous presence in the sky.

Much as conversations centre on the aftermaths of the deluges, hardly do especially victims talk about how to stem the inclement conditions.

The spectacle of patches of the nuisance left behind on the streets in the form of assortment of domestic garbage, used sachet water containers and others were reminders of how residents treat the environment which supports them.

Last Monday’s rain was not expected to be so merciless because for every season only one devastating one if witnessed if at all.

The Greater Accra Regional Minister and his team of officials took a trip around the city as it is expected of them.

Henry Quartey is, unlike previous ministers, tasked with managing Accra. During his tenure, he has unfolded various interventions to make the city flood-free. The rest, however, rests with the residents.

Structures continue to built on waterways among other inhibitions which hinder the free flow of rainwater.

We are aware of an ongoing Greater Accra Resilience Project intended to, in the long run, rid the city of the inconveniences and costly floods.

Be it as it may, it behooves residents too to show reverence to the environment by avoiding irresponsible conducts like dumping refuse in gutters.

It would as if we are nowhere near dropping such attitudes. When the rains are over, we return to the bad old ways once more forgetting what we endured.

When structures standing in the way of rainwater are pulled down, we are quick to pass discouraging remarks in the media. If only we could all join hands in calling for environmental discipline among city dwellers, some of the floods could be avoided.

We have come a long way with floods in Accra. While climate change has a big hand in the developments, the attitudes of our residents play a great role too.

The choked gutters whose contents are let out on the streets after each downpour, speak volumes about how we lead our lives in our communities.

For how long shall we continue to bemoan the lack of environmental discipline in our communities?

The whip must be cracked through the strict application of existing bylaws promulgated to protect lives and property.

'FOREST IN WILL PROBE'