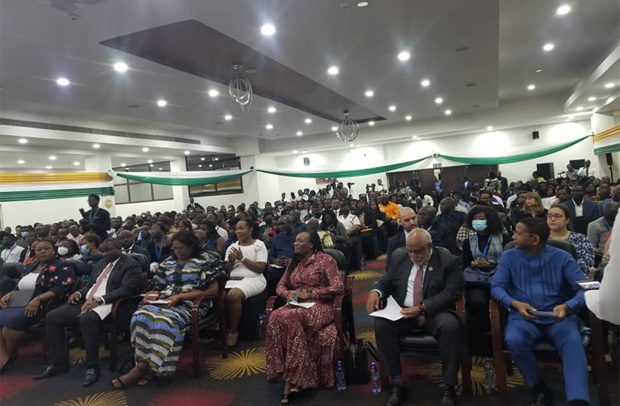 Mr. Yaw Sarpong Boateng (seated 2nd from left), other dignitaries and some participants at the celebration

THE EXECUTIVE Secretary of the Right to Information Commission (RTIC), Yaw Sarpong Boateng, has entreated state institutions and organisations to digitise their systems to make information accessible to the citizenry.

According to Mr. Boateng, the role of Artificial Intelligence and E-commence in the government digitalisation drive cannot be overlooked in modern times.

“The commission decided to adopt the theme for IDUAI because they have a role to play in service delivery and helping facilitate the work that we do,” he said.

He indicated that the commission, as the champion and regulator of access to information, has considered these modern technological changes and veered towards a system of work arrangement where the internet is largely used.

“In an era where we hardly have offices across the regions and districts in Ghana, we engage the public through the commission’s digital platforms without necessarily requiring the presence of an individual who may be in the remotest part of the country.

“The commission has been communicating with applicants, concerning application or appeals for review. We have started to settle complaints of persons satisfactorily online. By far, we have had a fairly good number of applications via electronic means,” he added.

He further stated that the commission’s digitalisation drive is disability friendly to make information accessible to all manner of persons.

“The world is fast moving in terms of Artificial Intelligence and E-Governance. It has become paramount for institutions to employ the services of the internet in its policy scheming and management operations to make information accessible to all,” he stressed.

Audrey Azoulay, Director-General of UNESCO Ghana, in a speech read on her behalf, said digital technologies shape the way society communicates and accesses information globally, yet in Africa, only 14% of households have internet access, compared to 57.4% globally.

“We must work as organisations to ensure that individuals can seek, receive and relay information by digitising our systems of operations to offer contents that are diverse in and available in multiple languages,” she noted.

She also called on countries around the world to embrace information as a global public good.