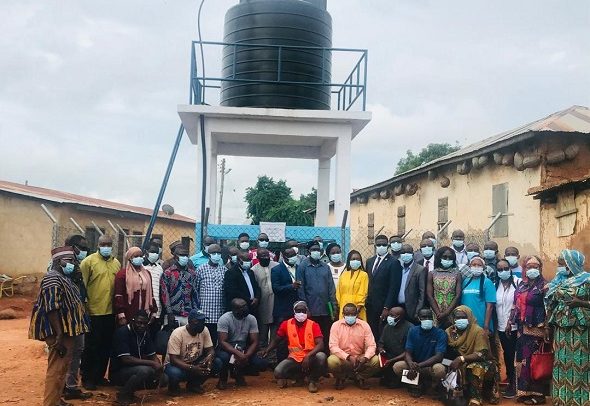 Residents of Sagnarigu Municipality in the Northern Region have been supported with water supply systems and handwashing facilities.

The facilities were made possible through a joint programme being implemented in the three Northern regions by UN-Habitat, UNDP, UNICEF, and WHO.

The programme is in collaboration with relevant public sector institutions in Water, Sanitation and Hygiene in Disaster-prone communities (WASH in DPC).

The WASH in Disaster-prone communities project was designed to provide flood resilient WASH facilities for communities, schools and healthcare facilities to increase access to good drinking water and proper sanitation facilities on a sustainable basis with a $20million grant for over three years.

The initiative is aimed at providing safe heaven and basic disaster mitigation capabilities to people in low lying communities where flood disasters are a yearly feature with over 300,000 people in 265 communities benefiting from Northern, Upper West and Upper East regions.

The WASH in DPC provided a change in all the 265 targeted communities by strengthening resilience in 265 communities reaching about 323,416 people.

The 265 communities have 100 per cent access to sustainable and safe drinking water sources through 659 interventions including the development of 169 new water points and the rehabilitation of 396 existing facilities.

Household toilets have been generated in all the 271 DPC communities through the Community-Led Total Sanitation (CLTS) process.

Karima Imoro, a resident at Ward K in the Sagnarigu municipality said the water supply system and handwashing facility will enhance handwashing among residents in the Covid-19 pandemic era.

She also expressed her excitement about the availability of clean water at their doorstep saying sometimes their child go to school late because until they come back home with water the children cannot get access to potable water to bath and go to school.

“ We used to walk to other areas in search of potable water to cook, drink and wash our clothes and bath our children to go to school but now we have ours within our area also we can now properly follow the Covid-19 protocols by washing our hands with clean water and we are grateful.”

Mr Salim Abubakari, the assemblyman for the Ward K Electoral Area said the water supply systems and handwashing facility will help residents fight the COVID-19 pandemic as well as sanitation and hygiene-related issues.

“ We had several cases of Covid-19 in this electoral area which was the highest cases in the Sagnarigu municipality and so this project will help them to practice the handwashing protocols which will help reduce the spread of the virus .”

He disclosed that the area experiences a water crisis in the dry season adding that the project will provide residents with access to potable water even during the dry season. 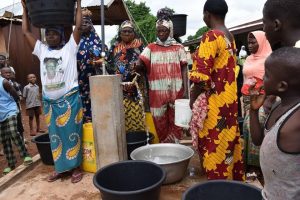 During a tour of selected areas in the regions where some of the Water Supply Systems and Hand Washing facilities were implemented, the Acting UN Resident Coordinator, Ghana, Niyi Ojuolape told journalists that water and sanitation are very important to live adding that without them people might lose their lives through cholera among other diseases.

At the Shishegu community, a similar water supply system was provided to a population of about 1,230people in the community.

A resident, Yamaha Dawuni, thanked the UN agencies for supporting them with the water supply system adding that they used to walk long distances to Sagnarigu dam to fetch the polluted water for consumption but for their intervention they now have access to potable drinking water.

A maintenance committee member at the Larini area, Yakubu Sadat, said the project has impacted the lives of residents especially women and children.

He however assured that the committee will ensure that the project is maintained adding that they sell the water according to gallons at an affordable price to residents and that the money realized from the sale of the water is used for the maintenance of the water supply system.

Dr Eric Moukoro, Program Manager of UN-Habitat, said they have fulfilled the impact of the project in the lives of the beneficiaries.

He hinted that in the Northern region there were over 400 communities that were flooded and that the National Disaster Management Organization (NADMO) took records of such communities and then selected the most deprived communities to benefit from the project.

In the North East region, the team visited Bunkpurugu where a solar mechanized well has been provided to supply clean water to residents in the community.

A resident Konlan Dorcas said, “ We used to walk long distances at dawn in search of water and sometimes by the time you return home it’s already noon but now that we have a solar mechanized well we are assured that of water anytime and we are happy and we thank them for providing us with potable water.”

At the Nakpanduri community, the Gomsuk Subchief, Joe Jampat said the provision of the water supply system has been helpful to residents.

According to him, due to the water crisis at the Nakpanduri Senior high School, the students also depend on the water for survival and appealed for the project to be expanded for other residents to benefit from it.

The UN and partners also had a partnership with the National Disaster Management Organization (NADMO) by training Disaster Response Teams and provided them with basic search and rescue kits for early warning and rescue.

The UN and partners urged the government of Ghana through its agencies responsible for water and sanitation to adopt the flood resilient WASH designs created by the UN partners for replication in other flood-prone areas and encouraged NADMO to continue with periodic reconstitution and retraining of the community-based disaster response teams for early warning and disaster risk mitigation.