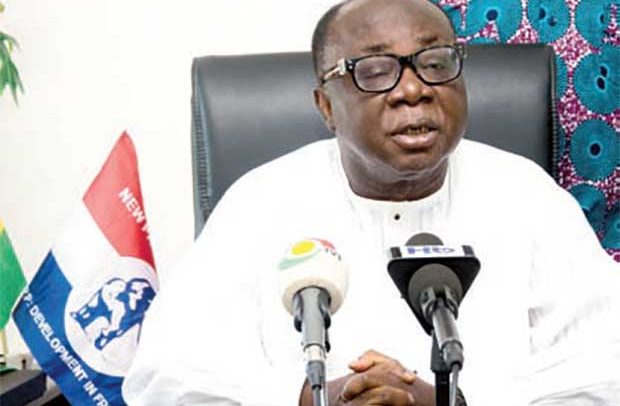 National Chairman of the ruling New Patriotic Party, Freddie Blay has called on Members of Parliament not to allow any confusion and division to disrupt the upcoming internal party contest which may affect the fortunes of the party come 2024 General Elections.

According to him, any confusion that rocks the party may affect the bid to break the eight and has therefore called on the party leadership to ensure there is peace among the various constituencies after the polls.

The NPP Chairman, also a former Member of Parliament, gave the caution to the MPs when he was addressing them at a Two-Day Strategic Workshop organized by the Majority Caucus to brainstorm on ideas about governance and Politics at Kwahu-Nkwatia in the Kwahu East District of the Eastern Region over the weekend.

He explained, “As leaders in your various constituencies, you must also ensure that you conduct and make sure that there is no internal tension and division particularly at this time the party will be conducting its internal elections”.

According to him “From this year onwards that we want to conduct our internal elections, party positions and even subsequently lead to presidential primaries, I will urge you as leaders of the various constituencies, ministers and all to conduct yourself in such a way that you don’t bring confusion in the party”.

“We have a job to do, we have our policies and programs and that is to make sure the party is attractive and strong. Our internal conflict, if we don’t handle it may bring results we have not bargained for in the 2024 elections”.

He also pleaded with the constituency’s leadership not to allow unnecessary confusion to rock the party as they head to the polls to elect their leaders in various constituencies.

“I will therefore plead with you not to allow the internal contest to shift their focus. I urge you to be united and work together as a majority caucus. The party remains solidly behind you and it is prepared to ensure the security in your area, in your respective constituencies in a way be guaranteed,” Chairman Freddie Blay hinted.