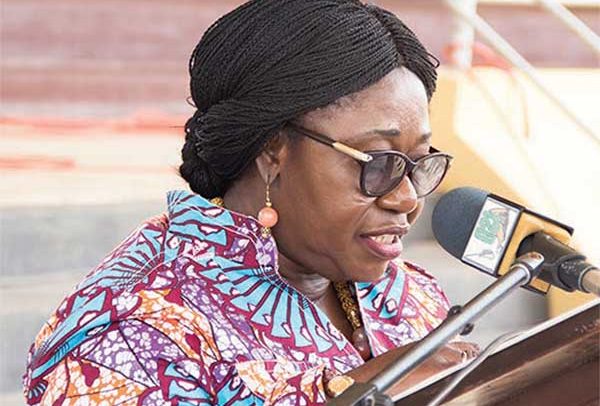 Chief of Staff at the Office of the President, Akosua Frema Osei-Opare has eulogized the leadership of the Majority Members of Parliament for their hard work.

According to her, the NPP government has done more to save the lives of Ghanaians and has therefore called on the Majority Caucus to promptly respond to any attempt to downplay the achievements of the Nana Akufo-Addo led administration.

She applauded the MPs when she was addressing them at the opening ceremony of a Two-Day Strategic Workshop organized by the Majority Leadership to brainstorm on Parliamentary duties held at Kwahu-Nkwatia in the Kwahu-East District of the Eastern Region over the weekend.

The second edition of the Strategic Workshop was organized by the Majority Caucus of Parliament led by Frank Annoh Dompreh, the Majority Chief Whip and MP for Nsawam/Adoagyiri and his deputies.

She continues, “It is without a doubt that the NPP government has done more to touch the lives of the ordinary Ghanaian with these life-saving policies”.

She noted that “Last year, the Vice President listed policies, programs and social interventions introduced by the NPP government and even went further to emphasized that government was poised to do more to eliminate the suffering of the Ghanaian citizen and this story we should not mute over, sleep on but we must speak consistently until every household sees the NPP story”.

“On the floor of the house, we must fortify ourselves appropriately to promptly respond to any attempt to downplay the achievements of the Akufo-Addo administration”.

“Going into our next session, our level of engagement must be ethically and significantly improved while coaching individual members on what interventions they ought to push to sustain and keep the party in power”.

She averred that “Our cooperation barriers must be eradicated, at this post, one of the reasons among others which led to the loss of many seats in Parliament during the 2020 polls. Leadership must formulate a periodic review of MPs’ performances on the floor of the house while encouraging proactive mentoring”.

According to her, “I admit that the work is not complete and has not become easier this is the time to awaken the political enthusiasm within our means and project the party’s policies like never before. I entreat all members within the majority caucus to learn and relearn and to unearth the strategies that will be unfolded to us so we can push, move, and sustained this agenda”, she said.

“I will commend the Majority caucus for the good job done in ensuring that all government policies are passed and I know you will pass the E-levy.

While I applaud the Minority leader and his team for the cooperation they have exhibited so far mostly I believe that there is more room for improvement”.

“I appeal for maturity, dialogue, cooperation, and tolerance. As a country, we must prove to the world that our democracy has come of age and I charge the Majority Caucus to take the front seat in this endeavor” she stated by thanking them once again.