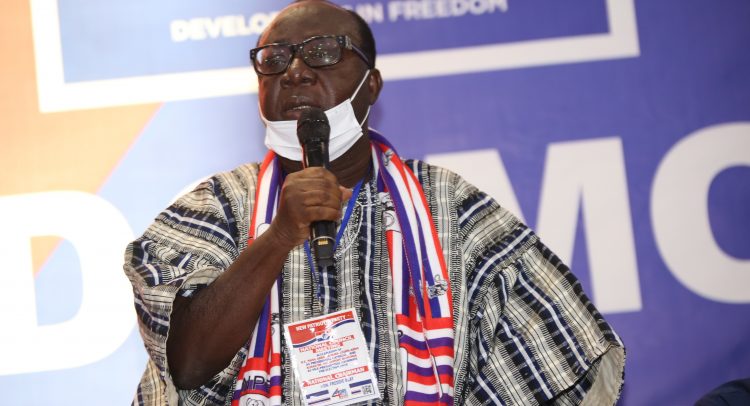 The National Chairman of the ruling New Patriotic Party, Freddie Blay has urged the Majority Members of Parliament, to desist from engaging the Minority MPs by turning the chamber into a forum for brawls but rather invite them for debates.

According to the NPP Chairman, “We all recognize that violence has never been the way out of any conflict situation, but rather dialogue and consensus-building”.

Speaking at the opening ceremony of a Two-Day Strategic Workshop organized by the Majority Caucus at Kwahu -Nkwatia in the Kwahu East District of the Eastern Region to brainstorm ideas, Mr. Blay urged the MPs to rather engage in dialogues with the Minority and debate on issues that will bring development to the nation.

“Parliament is Parliament! And not a forum for brawls but rather coax them for debates. I would plead that we also tone down on the heated media banters between the majority caucus leadership and the Speaker of Parliament,” Mr. Blay stated.

The NPP Chairman, explained, “It could be said that the last Parliamentary session was quite difficult for you, the government, the Party, and indeed all Ghanaians, considering the level of tensions and aggression demonstrated in parliament particularly- I dare from the minority side”.

He said “As much as the very heated debates may be good for our democratic development, I doubt if it is healthy for the stability and growth of our nation” adding that “The consequences of a hung parliament which the NPP is currently confronted with are not a disaster as this is not peculiar to us”.

He continues “We have observed similar cases across other jurisdictions, even in the United States. Notwithstanding. the very good lessons learnt from similar instances has been that of consistent and cooperative dialogue aimed at building consensus in the greater interest in nation-building”.

“I believe as members of the Majority cuscus, you must be seen to be less aggressive and confrontational especially when you shoulder the greater responsibility of pursuing peace, friendliness, and ultimately THE UNITY AND DEVELOPMENT OF OUR DEAR NATION”.

Mr. Blay continues “It does not serve the interest of the government and for that matter the Party when chaos becomes the order of the day in the chamber of Parliament”.

He said “It only makes the Ghanaian people more resentful of our people, policies, and programs. As experienced politicians and veterans who have worked our ways up into parliament, believe you understand how well the game is handled”.

“You Push Your Way but be seen to be Play It their Way sometimes”. Therefore I encourage all of you to be nice to members of the minority and try to always be friendly, humbly but firmly pleading with them to come along just to make sure you get what you want”.

He added that “of course, it must not be lost on us that we have an opposition desperately scheming their way back into power by ensuring we appear less attractive to the electorates.”

He also tasked the MPs not to allow their posture not smack that of dismissiveness, to avoid arming our opponents against our bid to break the 8.

“Let us try to always exercise much restrain in our reactions when responding to the vicious propaganda of the opposition NDC. Your colleagues in the NDC are determined to undermine you but you should be more resolute and strategic”.

“Our focus can remain on the minority leadership while we channel our energies towards making a good case for the Ghanaian people. I suggest you remain focused on your core mandate of pushing the government’s business at any moment with less drama”.

“As you return to Parliamentary duties next week, i wish to urge you to put your best foot forward. Use the experiences from the last year to make sure you work towards a productive consensus that would result in tangible deliverables for the government”.

Mr. Blay added that “A hung parliament is always not in the interest of the government in power. As a slim majority caucus, this would put you on your toes. This is in no way going to be easy, but as I earlier said, you are veterans and I believe you have what it takes to manage the burden and stress this brings on you as leaders”.

He indicated that by appealing to the NPP, not to allow the internal contest to divide the ranks and shift of the focus, rather urge them to be united, working together as the majority caucus.