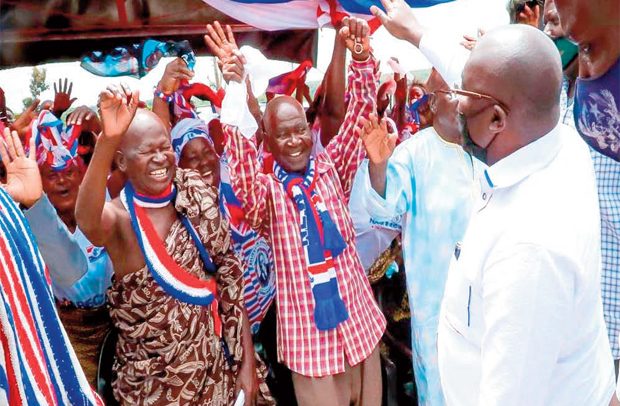 Vice-President Bawumia during his tour of the Ashanti Region

Vice-President Dr. Mahamadu Bawumia insists Ghanaians made a huge mistake by voting for the National Democratic Congress (NDC) in 2008.

According to him, ex-President John Kufuor’s New Patriotic Party (NPP) government worked and chalked up massive successes in all sectors of the state but said the electorate mistakenly fell for the ‘blatant lies’ of the NDC and so they voted for them (NDC) and that led to a sharp depletion of gains made.

Addressing the people of Kodie in the Afigya Kwabre South District during his Ashanti regional tour, the Vice-President said the country would have developed faster had the NPP won the 2008 polls.

He said like the Kufuor administration, President Akufo-Addo’s NPP government also inherited an ailing state but has transformed the country in a short time.

Dr. Bawumia, therefore, implored the electorate to renew the mandate of the NPP on December 7 so that the massive gains made would be consolidated.

“The President Kufuor government inherited a weak economy and a Ghana in bad state from the NDC in 2001 but he worked harder to transform the country. Through better leadership, he introduced National Health Insurance Scheme (NHIS), Capitation Grant, free maternal care and he also gave life to the economy,” he stated.

Dr. Bawumia also said, “We made a big mistake by voting for the NDC in 2008 as they mismanaged the economy and destroyed all the gains secured by Mr. Kufuor. During their eight years in political office, the NDC collapsed the NHIS, brought dumsor, destroyed the economy, refused to employ graduates and others.”

“After inheriting an ailing economy in 2016, the NPP administration has brought renaissance into the economy. We have also brought Free Senior High School (SHS) policy, employed nurses and teachers, brought National Builders Corps (NABCO) and many more positives,” he added.

He said, “All you need to do on December 7 is to vote massively for President Akufo-Addo and all NPP parliamentarians so that the government can complete the good works for us.”

He said the NPP’s four years is far better than the NDC eight years in power, adding, “Since Ghana’s independence, no government has been able to provide free electricity and free water. The NPP are the best managers of the state so vote for us again.”