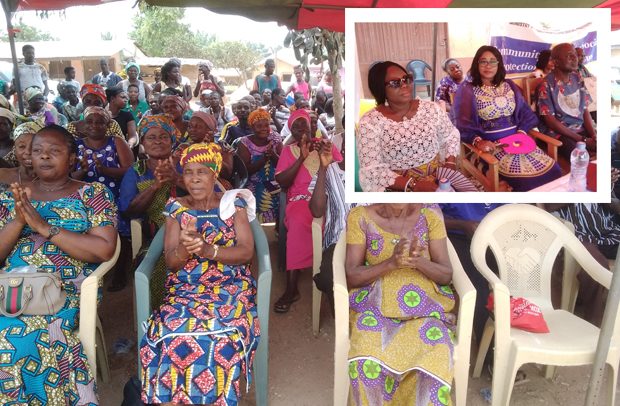 Some of the residents at the programme. INSET: The minister and her team

THE Minister of Gender, Children & Social Protection, Cynthia M. Morrison, has appealed to chiefs and community elders to desist from settling cases of rape and defilement at home.

She said rape and defilement are high crimes that can only be settled by the courts after thorough investigations by the police.

The minister made the remarks at the Community Dialogue Series on Sexual Violence Against Girls and Boys organised by her ministry at Akyem Amonom, near Abomosu in the Atiwa West District of the Eastern Region.

“In cases like rape, we have realised that when perpetrators are rich and powerful or have influence they are able to get some of our chiefs and opinion leaders to settle the cases at the palace,” she said and added that “in most cases, offenders who are poor and have no influence tend to get arrested. If anybody is accused of rape or defilement the case must be settled in the law courts.”

She said the perpetrators of such crimes only seek ‘asylum’ from chiefs and other opinion leaders without the intervention of the police and the law courts which, to her, is a bad practice and opinion leaders must refrain from such acts.

She warned that anyone who attempted to settle such criminal cases in the palace or at home when caught would be dealt with in accordance with the law.

The minister further advised children who suffer sexual abuse to confide in trusted relatives and friends to help them report to the police. Besides, she urged stakeholders in the communities to offer help to victims of rape.

Tamasco Gets Classroom Block From GNPC

Tempane: Widow Of Late Parliamentary Candidate To Lead NDC In 2020