CHIEF EXECUTIVE Officer and Executive Chairman of the Holy Trinity Spa and Health Farm, Dr. Felix Kwaku Anyah, has once again made Ghana proud by being conferred with Africa’s Most Respected CEO award.

The event was hosted by the Business Executive in collaboration with the Economic Development Board in Mauritius.

Over 10 years after its establishment, the Holy Trinity Spa and Health Farm is still the only medical spa in Ghana and accredited by the Ministry of Health.

The spa facility, located along the Volta River at Sogakope, was also conferred with an award as Africa’s Best Destination Spa for Wellness Conference. 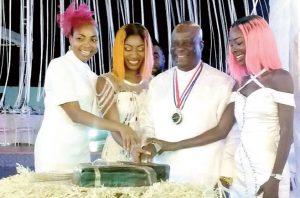 Reacting to the award, Dr. Anyah expressed satisfaction that the reputable organisation has recognised his efforts in the health sector.

He described the success of Holy Trinity Spa and Health Farm as a victory for integrative health, the latest approach to healthcare which combines scientific medicine with traditional healing.

According to him, “ill-health conversely is not only the presence of disease or injury but physical, emotional, mental, social, psychological and spiritual dysfunction.”

A mammoth thanksgiving service was organised by the facility in Sogakope on Sunday, August 7, 2022.

“Most of these lifestyle problems cause death but may show little or no symptoms. Hypertension for example, has earned the name ‘Silent Killer’. “So is the increase in blood clots in the legs causing strokes, heart attacks or sudden death especially on aircrafts, otherwise called Economy Class Syndrome,” she added.

Dr. Anyah has bagged numerous awards in the past and some of these include the Millennium Excellence Award in Medicine by the Millennium Excellence Foundation, Most Respected CEO – Health, 2018, 2019, 2020, 2021 organised  by the Business Executive; Overall Best CEO of the Year organised by 8th Ghana Entrepreneurs and Corporate Executive; Best Health CEO of the Year at the 7th Africa Health Legendary Awards, among others.