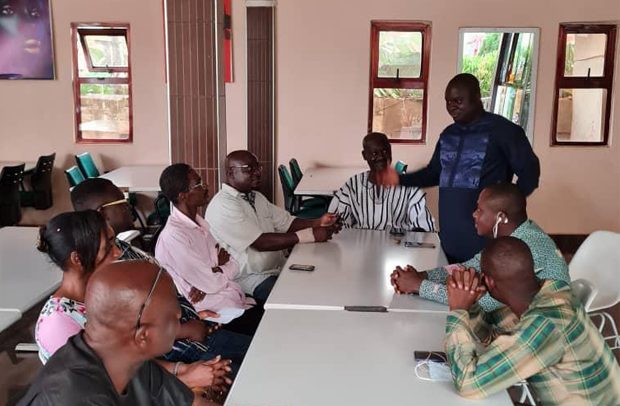 Ghana Journalists Association (GJA) Presidential aspirant, Albert Kwabena Dwumfour, says he will ensure that duty bearers respect the media’s role to work in freedom and hold leadership accountable as enshrined in the 1992 Constitution.
Mr Dwumfour said, “the provisions in the 1992 constitution on the rights of the media are there for a purpose and not for a joke” and indicated that Journalists had the moral obligation to defend the citizenry.
Mr Dwumfour said this in an address to the staff of the Ghana News Agency in Kumasi as part of his three-region tour to familiarize with GJA members.
He said the media’s role could not be undermined because of the constitutional mandate and said he would employ legitimate means when given the nod to ensure that Journalists work in an environment that is free from intimidation and government control.
Mr Dwumfour pledged to rebrand the GJA to make it attractive and whip up the interest of dormant members.
“Let’s give the Association a new branding, let’s get it a new look, let’s all feel belonging and let’s build the future of our association together,” he said.
He urged members to make meaningful contributions to bring the needed change, adding “we must all be proactive and not reactive to issues regarding our association to make it more vibrant and more attractive to especially, the youth.”
The Ashanti Regional Manager of the Ghana News Agency (GNA), Kwabia Owusu Mensah, who hosted Mr Dwumfour and his team, said the Association needed some dynamism in leadership to effectively manage and make it attractive for more people to join.
At the Ghana Broadcasting Corporation (GBC), in Kumasi, Mr Dwumfour and his entourage met the news editor, John Yeboah, who shared his experience as a former Secretary to the Association in the region.
He conceded that the GJA needed an overhaul to make it attractive and sustainable and to take its rightful place in contributing to national development.
Mr Yeboah said that completion of the Ashanti Regional office of the GJA was critical to provide a decent convergence point for media practitioners in the region.
Zonal Business Manager at Graphic Communication Group for Ashanti, Brong Ahafo and Northern Regions, Martin Omari Sarfo, noted that Mr Dwumfour had promised to tackle most of the concerns that bothered him regarding the development of the Association and mentioned that the apathy of members towards the development of the Association called for urgent need to rebrand the Association.
He was, particularly, concerned about the lack of remuneration for several Journalists in the country and conceded that they worked to contribute to productivity to the various media houses that engaged them.
However, he noted, these Journalists had no assurance of a monthly stipend.
He, therefore, commended Mr Dwumfour for appreciating the unpredictable and discomfort situation that most Journalists found themselves in, adding that Mr Dwumfour’s vision of planning to institute welfare policy to ensure that Journalists get their due in the discharge of their duties was in the right direction.
At Techiman, Mr Dwumfour responding to questions from members of the Association in the Bono East Region moving to Sunyani to vote in the GJA election, assured them that arrangements would be made to enable them to vote in their region, adding that he would facilitate their request at any meeting of the higher policy-making of the Association.
In Sunyani, Mr Dwumfour met two separate groups made up of retirees and mainstream members, sold his vision and policy plans to them and encouraged them to avoid apathy towards the Association.