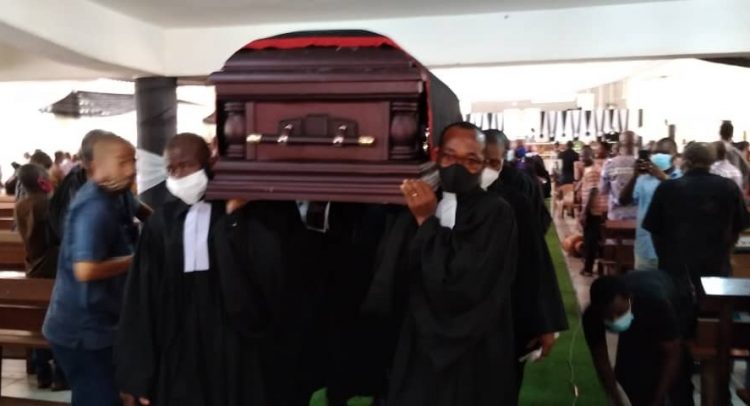 The last Moderator of the Synodal system of the Evangelical Presbyterian Church (E.P Church), Very Reverend Dr Livingstone Komla Buama has been laid to rest.

He was buried at Klefe-Kpodzi, his hometown.

Moderator of the General Assembly of the E. P Church, Ghana, Right Rev. Bliss Divine Agbeko, in an exhortation said the late Rev. Dr Buama was a great man of God, selfless and had done a lot to the growth of the Church.

He said the Church would continue to uphold the principles the late Moderator stood for, describing him as a true pastor, teacher, friend and prayer partner.

Rev. Dr Agbeko urged the Church to be steadfast, always abiding in the word of God, knowing very well that their labour would not be in vain.

He said death was not mighty and dreadful and powerful as it had been swallowed by the power and resurrection of our Lord and Saviour Jesus Christ.

The E.P Church, Ghana, described him as a great pillar of support to the successful ministry of the Church and one of the leading figures who stood against all odds to lay a solid foundation for the rich Evangelical Presbyterian heritage.

The Church said Rev. Dr Buama did the most difficult and challenging work in the establishment of the Evangelical Presbyterian University College in 2007.

He would be remembered for developing and implementing instructional and formational opportunities that nourish quality leadership and life in the Church during his tenure, the Church added.

The Church said the teachings and sermons of the late Moderator were comprehensible, adding that he was someone who spoke with kindness, a motivational and inspirational figure, who touched many people.

Rev. Dr Setri Nyomi, Accra Newtown District Pastor, E.P Church said the late Buama was one of the best systematic theologians the world ever had who taught the true Christian doctrine.

She said through her husband’s admiration for academic excellence, support, encouragement and sacrifice she was able to climb the educational ladder to the University level.

“I admired your ability to readily forgive others, bear insults and accommodate dissenting views, reconcile warring factions through dialogue and restore peace when it mattered,” she said.

Mrs Buama said the dexterity, ingenuity, critical objective and rational analysis of issues exhibited by her husband make him stand tall among his peers and contemporaries in academia.

She said her husband took the education of their children seriously and ensured that they all had higher education based on their potential.

Very Rev. J. Y Ledo, the former Moderator of the E.P Church, said the Rev. Buama sacrificed his life to the Ministry of the Lord.

The Christian Council of Ghana in a tribute said the late Buama’s affable nature and respect for people of other denominations and other faiths enabled him to form effective partnerships to enhance his ministry in the ecumenical circles.

Very Rev. Dr Buama died at the Ho Teaching Hospital on December 7, 2020, after a short illness. He was 78.
President Nana Akufo Addo, through the Volta Regional Minister, Dr Archibald Yao Letsa, donated cash of GHC10,000 to the Church and the family.

The 2020 flagbearer of the National Democratic Congress, John Dramani Mahama, through the Volta Regional Secretary of the Party, James Gunu, also donated an amount of GHC5,000 to the Church and family.