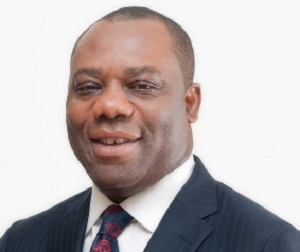 MATTHEW Opoku Prempeh, Minister for Energy, says the Electricity Company of Ghana (ECG) cannot afford to continue its current tangent of operation which is contrary to trends in the global energy sector.

He said it was to correct such anomaly that a Meter Management System (MMS) for ECG was launched in September this year, to provide a common digitalised platform for the integration of all ECG’s smart prepaid meters for effective monitoring and management.

The Minister, who was speaking at the 5th Ghana Energy Awards recently organised by the Energy Media Group and GP Business Consulting at the Labadi Beach Hotel, Accra said “This is to reduce commercial losses through effective monitoring of smart meters and replacement of obsolete and faulty ones, and to offer convenience in purchases of electricity everywhere to increase revenue growth.”

He said “Smart meters need smart systems with smart processes, and we are moving from the era where physical inspection is giving way for a more digitalised era in line with the government’s digitalisation agenda” adding that “Every meter, its location and consumption pattern can be tracked and accounted for. This will help detect illegal connection activities, malfunctioning of meters, etc, for prompt rectification.”

Commenting on the theme for this year’s awards, ‘Digitalised Energy Sector: The Key for a Resilient Economic Future’, he said digitalisation played a very important role in every sector towards building Ghana’s economy.

“This is being done through better efficiencies, reducing the risk of corruption and promoting convenience. President Akufo-Addo’s vision is that in the 21st century, we should be able to take advantage of the innovative tool of digitalisation to power and propel our economy in every way possible,” he said.

He said in April 2021, Vice President Bawumia launched the National Petroleum Authority (NPA)’s National Retail Outlet Fuel Monitoring System by which it is now able to monitor the fuel in the tanks of all Oil Marketing Companies (OMCs) in Ghana in real time. This makes it virtually impossible for OMCs to receive illegal fuel from sources such as bunkering and smuggling activities in their tanks.

Again, he said the system is based on a state-of-the-art supervisory platform which includes the installation of Automatic Tank Gauges (ATG) and Forecourt/Dispenser Transaction Control System that will provide data on sales and in-tank volumes at the forecourt.

In the upstream sector, he said the Ghana Petroleum Register has been employed.  It is a digital platform where one can access information on the award of blocks, current petroleum agreements and contracts in the upstream petroleum industry.

Also introduced is the Local Content e-Portal System which allows for companies operating in the upstream petroleum industry to submit their local content plans and reports in real time, and enables the regulator to track local content progress of Ghana while also assessing local content compliance by companies in accordance with LI2204.

“This government remains focused on digitalisation in all sectors as an important catalyst in promoting a resilient economy,” he emphasised.

Former President J.A. Kufuor and late President J.J.Rawlings were honoured with a Lifetime Achievement Award in recognition of their contribution to the development Ghana’s energy sector. They each received a citation and a portrait.

Emmanuel Antwi Darkwa, CEO of VRA, and Cynthia Lumor, Deputy Managing Director of Tullow Ghana, were adjudged the Energy Personality of the Year in the male and female category respectively.