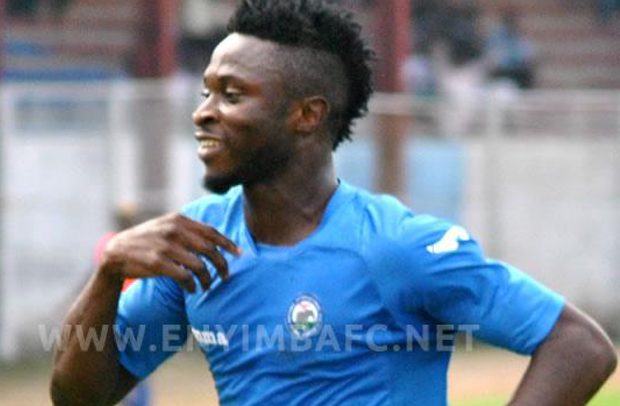 Tributes have been paid to Enugu Rangers and Nigeria striker Ifeanyi George, who was killed in a road traffic accident on Sunday morning along with two other players.

George, 26, was driving to Lagos from Enugu when his vehicle collided into a stationary truck.

The player was returning home after being granted leave by Rangers due to the NPFL suspension amid the coronavirus pandemic.

“It’s a big shock to me,” Rangers defender Ifeanyi Nweke told ESPN. “This was all caused by coronavirus. He was travelling back to his city after we were all given 10 days’ break due to the outbreak, and was with two other players in their own car in a convoy. They were OK.”

George had represented Nigeria’s home-based Eagles team on two occasions, playing for Salisu Yusuf’s team in both legs of their double-header African Nations Championship qualifier against Benin in August 2017.

“He was a friendly guy and a good player,” Nweke added. “He’d been with First Bank Football Club, Enyimba, and now was at Rangers.”

Ex-Barcelona B winger Ezekiel Bassey overlapped with George at Enyimba before the latter moved onto Rangers.

“He was a very cool guy, and an easy-going dude,” Bassey told ESPN. “It’s so sad to have lost him in this way. It’s so sad, and so painful.”

FC Tulsa midfielder Raphael Ayagwa, who played alongside George for Nigeria, also paid his respects to his former teammate.

“He was a really nice guy, funny and easy-going,” Ayagwa told ESPN. “I still can’t believe it. “It’s so sad, and such a big loss, just another case study for Nigeria’s bad roads.”

A statement issued by Rangers attempted to clarify the circumstances around the accident.