The European Union (EU) is expected to remove Ghana from its money laundering list.

Ghana was placed on the list of countries deficient in anti-money laundering months ago.

But following President Nana Akufo-Addo’s visit to Belgium from 19th to 20th May, 2021, the European Commission, Government said, has announced the decision to remove Ghana from the list.

It said the Commission thus congratulated Ghana for the reforms embarked on, as well as the sustainable, robust systems deployed towards being taken of the list. 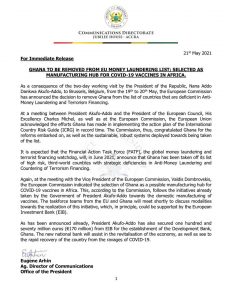