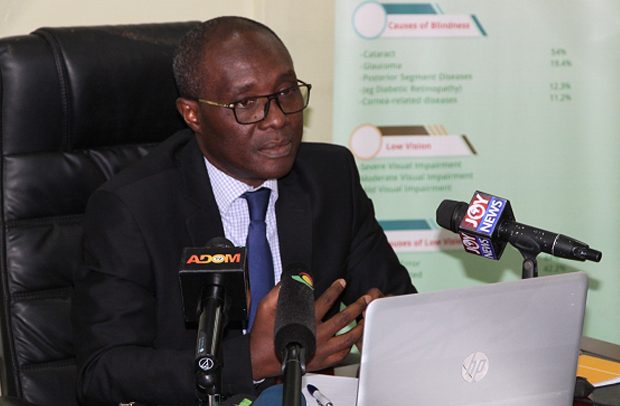 The Ghana Health Service (GHS) is in the process of formulating an Eye Health Policy to ensure universal coverage for all eye conditions at affordable cost to all Ghanaians.

The policy would ensure that basic eye screening was integrated into the country’s healthcare system, particularly at the primary level, and also ensure that healthcare providers take eye health to the homes of Ghanaians.

The Head of Eye Unit, GHS, Dr. James Addy, who disclosed this at the World Sight Day media briefing in Accra, said the move was in line with global effort to prevent blindness and vision impairment.

Dr. Addy, therefore, noted that as part of the World Sight Day which falls on Thursday, October 10, 2019, about 2,600 people living with cataract would benefit from a free surgery to begin on the commemorative day to December 2019.

He said apart from the free surgeries, the GHS and its partners would also conduct free eye screening for students in some schools in Cape Coast, where the 2019 event would be held.

Dr. Addy said due to ageing and unhealthy lifestyles, everybody was vulnerable to blindness and vision impairment.

He, therefore, advised people to take their eye health and that of their dependants seriously by prioritizing regular check-ups.

He also cautioned people against self-medication, the introduction of unhealthy liquids and foreign materials into the eyes, and also hitting or poking things into the eyes.