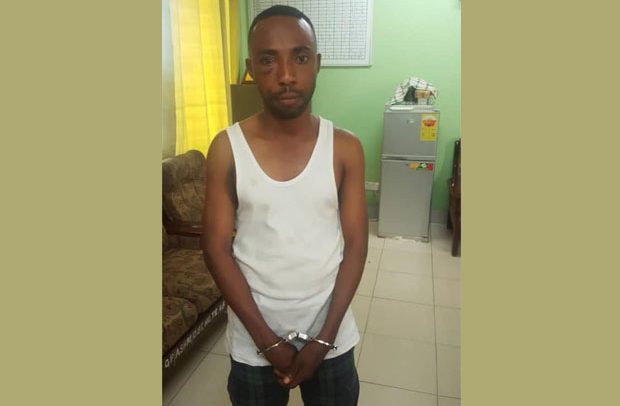 Isaac Coffie after he was arrested.

A 30-year-old unemployed man has been sentenced to 10 years in jail by the Ashaiman Circuit Court for swindling church members of Global Reformation Church at Zenu in the Kpone Katamanso District of Accra of GH¢22,500.

The convict, Isaac Coffie, collected various sums of money from his victims under the pretext of doubling them for them but went into hiding afterwards for months.

He gave them a bathing soap to bath for six weeks after which he said huge sums of monies would appear in their bank accounts. However, the monies did not appear after using the soap. He was charged with seven counts of defrauding by false pretences and pleaded guilty.

Assistant Superintendent of Police (ASP) Ahenkorah Afrifa had told the court presided over Gabriel Martey-Teye that the accused person introduced himself last year as someone who doubles any amount of money spiritually.

In April, 2019, head pastor of the church brought the accused person to the Zenu branch of his church and introduced him to the congregation which made some members of the congregation gain interest in his deceptive claim.

The accused person later met the complainants at various locations at Ashaiman and collected monies totalling GH¢22,500 from them and gave them instructions to bath with his soap.

The complainants waited patiently for six weeks and when they went to check their accounts, no money appeared in their respective accounts.

After realizing that they had been defrauded, the complainants launched a manhunt for the accused person and had him arrested on July 9, 2019.