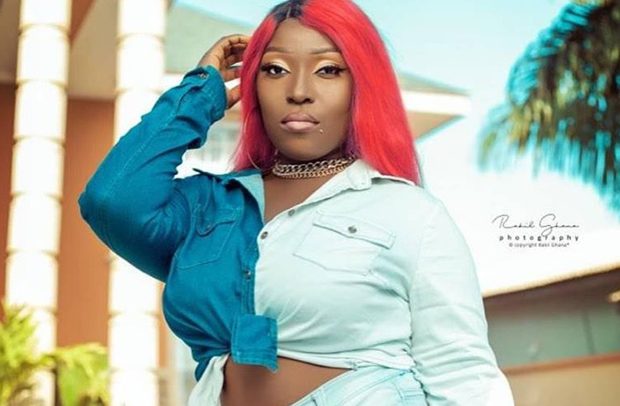 Eno Barony in her song, punched hard at some female artistes such as Sista Afia, Freda Rhymz and hiplife artiste, Medikal.

BEATWAVES can confirm that Eno’s track was released as a direct reply to Sista Afia’s ‘You Got Nerves’ song.

‘Argument Done’, which was released on May 8, according to a section of music stakeholders, was also a reply to Medikal’s jab that he won’t waste his time to record a diss track to reply a female rapper (Eno) who looked like corpse.

Medikal took to twitter to respond to accusations of ghostwriting Sista Afia’s ‘You Got Nerves’ song by saying, “Don’t ever think I will waste time recording a diss track to a female rapper, especially when the person looks like corpse.”

Eno in her diss song took heavy jabs at Sista Afia and Medikal, claiming Medikal wrote one of Sista Afia’s diss tracks against her.

She challenged the alleged ghostwriter, supposedly hiding behind Sista Afia, to face her himself.

Eno, however explained that she was not fighting her colleague, Sista Afia, but was simply setting the records straight for people, adding “it was all about the music.”

BEATWAVES gathered that a lyrical war had been brewing among some female rappers since Sista Afia dropped her diss songs, ‘WMT’ and ‘You Got Nerves’.

Since its release on April 22, Sista Afia’s ‘MTW’ song has ignited a lot of controversy that has heightened with the release of other diss songs by other female acts which include Freda Rhymz.

Eno, who tags herself as the ‘Rap Goddess’, believes that Sista Afia and other female rappers do not qualify to face her in any rap battle.

Eno noted that Sista Afia and others should have shown some courtesy by coming to seek permission from her before venturing into any form of beef.

Born in Tema, Accra, Eno released her debut single, ‘Wats Ma Name’ and also ‘Tonga’, the remix of the track ‘Tonga’ by Joey B featuring Sarkodie in 2014 that lifted her into the limelight.

She later recorded more songs including ‘Megye Wo Boy’ in 2015, on which she collaborated with Abrewa Nana.

In 2016, she recorded a single, ‘Daawa’, with Shatta Wale and also worked with hiplife rapper, Kwaw Kese, on a single called ‘GARI’.

Other collaboration also featured singles, ‘Touch the Body’ with Stonebwoy and ‘King of Queens’ with Medikal.

In 2017, she released a song titled ‘Juice Me’ followed by another single with Ebony Reigns, titled, ‘Obiaa Ba Ny3’.

'Allow Us To Play Golf'

No Punishment For Hertha Celebration