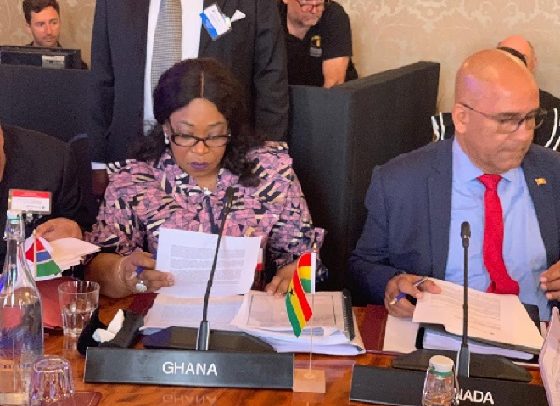 Ghana’s Minister for Foreign Affairs and Regional Integration, Shirley Ayorkor Botchwey, has joined her counterparts from around the world in commemorating the 70th anniversary of the Commonwealth.

The celebration was held on the sidelines of the Commonwealth Foreign Ministers’ Meeting which took place in London, United Kingdom, on July 10, 2019.

Formed in 1949, the Commonwealth is one of the world’s oldest political association of states, with its roots dating back to the British Empire when some countries were ruled directly or indirectly by Britain.

The London meeting considered a number of agenda including the: implementation of 2018 mandates, CHOGM 2020 Updates, Decision on the Board of Governors Agreed Recommendations for Foreign Affairs Ministers in Response to the High-Level Group, Reports on the Governance of the Commonwealth Secretariat, Country Situations- Belize, Cyprus and Guyana, Future CFAMMs and regularity.

Making inputs on the implementation of the 2018 mandates, Madam Ayorkor Botchwey outlined what Ghana was doing in respect of Girl Education.

She informed the meeting that the Government of Ghana was committed to providing equal opportunity for all to obtain access to education, emphasising that educating girls has a wide-ranging impact on society and human development.

The Minister explained “that Ghana is convinced that when girls are educated they will make meaningful contribution to health, social and economic development.”

She also drew attention to the abuse, discrimination and violence suffered by girls on a daily basis and the need to protect them.

She highlighted the issue of the youth as particularly important since many Commonwealth countries were confronted with rising youth unemployment and thus the need for urgent action to address the problem and stem the tide of African youth especially undertaking perilous journeys across the Mediterranean to seek greener pastures.

On strengthening democratic institutions and promoting peace, Madam Ayorkor Botchwey highlighted that following Ghana’s democratic transition in 1992, the country has made significant efforts in promoting a liberal democratic culture and system of government.

She cited for instance the independence of the Electoral Commission in conducting free, fair and transparent elections in Ghana and the significant role played by the media and civil society organisations in the country.

In respect of Climate Change, she pointed out Ghana’s unwavering commitment to the Paris Agreement, disclosing that the country has put in place measures to mitigate, reduce vulnerability and increase resilience to the devastating effects of the phenomenon.

She stressed that the Government of Ghana has demonstrated strong political will in dealing with the issue of climate change, in building resilience and by raising the ambition of its climate change agenda as evidenced by the Nationally Determined Contribution (NDC) Implementation and Investment Plan under the Paris Agreement, the President’s Coordinated Programme of Economic and Social Development Policies 2017–2024 (an economic and social policy regime intended to create an industrialised and prosperous nation)and the Ghana Sustainable Development Goals Indicator Baseline Report, led by the President of the Republic of Ghana, who is a Co-Chair of the Eminent Group on Sustainable Development Goals.

She revealed that some 20,000 young people have been engaged Ghana to plant more than 10 million trees in two years to restore degraded lands, while creating much needed jobs for the youth.

Meanwhile, the host of CHOGM 2020, Rwanda, has identified five policy areas aimed at ensuring that the meeting delivers initiatives that are achievable, comprehensive and meaningful.

These are Governance and the Rule of Law; ICT and innovation; Youth; Environment and Trade and Development.

The meeting took note and commended the Rwandan Government for choosing issues which are relevant to the Commonwealth.

Madam Ayorkor Botchwey also commended the Government of Rwanda for the proposed policy areas particularly and pledged Ghana’s support for a successful meeting in Rwanda.