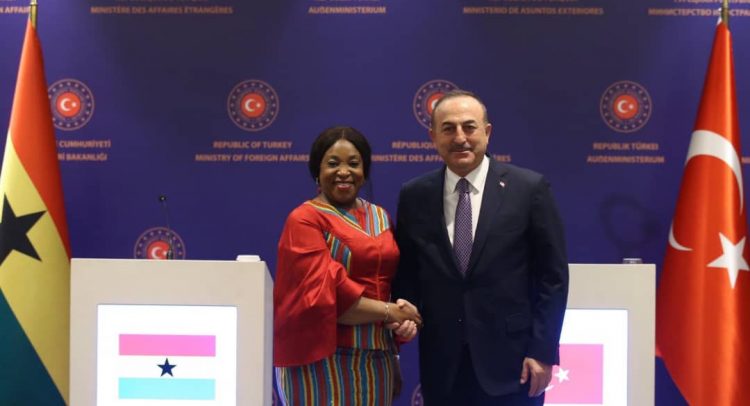 Minister for Foreign Affairs and Regional Integration, Shirley Ayorkor Botchwey, has called on Ghana and Turkey to work towards enhancing their trade volumes.

She made the call in Istanbul during her visit to Turkey which is at the invitation of her Turkish counterpart, Mevlüt Çavuşoǧlu.

The visit, which is within the framework mechanism of bilateral consultations between the Foreign Ministries of Ghana and Turkey, will afford the two Foreign Ministers the opportunity to discuss issues bordering on Ghana-Turkey relations and ways to strengthen and deepen these relations for the mutual benefit of the two countries.

According to the Ghanaian Minister, trade relations between Ghana and Turkey have over the years improved.

She said it had been skewed in favour of Turkey whose trade volume reached over $426.16 million in 2017 of both exports and import, making Ghana Turkey’s 3rd largest trade partner in Sub-Saharan Africa.

The Foreign Minister noted however that
in 2018, the trade volume reduced to $406.26 million and hence, urged both sides to work to enhance our trade volumes in the coming years;

As a result, she called for the resumption of the Ghana-Turkey Permanent Joint Commission for Cooperation meeting and Political Dialogue between the two countries to further strengthen both nations’ bilateral relations, particularly, in the areas of trade and investment.

She therefore lauded efforts to hold the 5th Ghana-Turkey Joint Economic Commission Session scheduled to be held in Ankara from 22nd to 23rd January, 2020 which has been put on hold since 2014 and assured her host that Ghana was ready to make the most of this opportunity for the mutual benefit of the two countries.

The Minister informed her host that the Government of President Nana Addo Dankwa Akufo-Addo, since its inception in January 2017, has made significant strides to better the lot of the Ghanaian people through the introduction of various interventions such as the Free Senior High School Policy; Planting for Food and Jobs programme and the One District One Factory initiative.

According to her, as a result of the stable political and sound investment climate, the implementation of sound macroeconomic policies and a number of measures such as the reduction of the fiscal deficit, reduction in lending rates, stability in electricity supply, investor confidence, among others, has been boosted, thereby making Ghana a favourable destination for investment.

She also spoke about the Ghana Beyond Aid Agenda, calling on friendly countries such as Turkey to partner Ghana to achieve its industrial ambition.

Madam Ayorkor Botchwey informed her hosts that the coming into force of the Africa Continental Free Trade Area (AfCFTA) with a 1.2 billon market size, provides a big opportunity for Turkish businesses to take advantage of.

She therefore urged Turkish investors to take advantage of the favourable investment environment in Ghana to do business in the country.