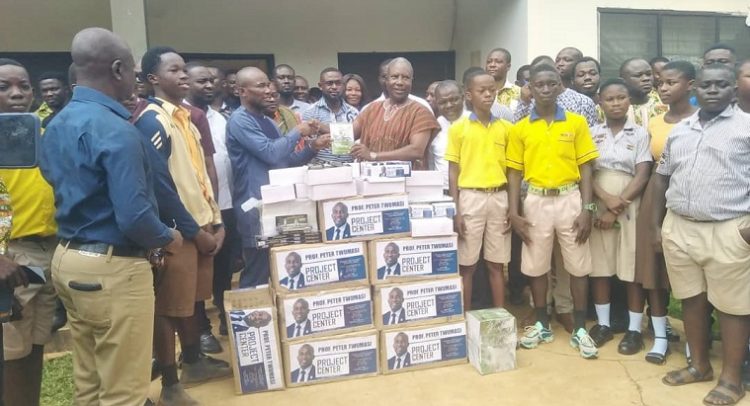 Ahead of their examination, the 1,440 BECE candidates in the district have received free Mathematical Sets.

The largesse was made possible following the timely intervention of the Professor Twumasi Project Centre, a development-oriented group which is based at Ahafo Ano South West.

The centre is funded by a native of the area, Professor Peter Twumasi, who is the Administrator of the Ghana Sports Authority, and it is to offer a helping hand to the needy in the area.

The project centre mainly support developmental projects in the areas of Education, Agro Industry, Health Technology Transfer and Training, Environment and Media in the district.

Presenting the items to the District Education Directorate, Professor Twumasi said “the gesture is to support teaching and learning in the district to improve performance in the BECE.”

According to him, he was born and bred in the area and the donation formed part of his social responsibilities to the community, stressing that he wants to support the youth to develop their potentials.

Prof. Twumasi said formal education was key to his success in life, admonishing the youth to shun all social vices and rather learn seriously in order to become influential people in future.

He again donated 100 copies his book titled, ‘Rising From The Farmhouse’, which is to be kept in all school libraries to serve as a guide and motivation to the youth.

District Education Director, Alfred Kojo Boateng, receiving the items, expressed his gratitude, noting that the donation has come at the right time as it would help the BECE candidates.

He, however, made a passionate appeal that most schools in the district lacked infrastructural development, therefore the need for the project centre to immediately aid in that regard.