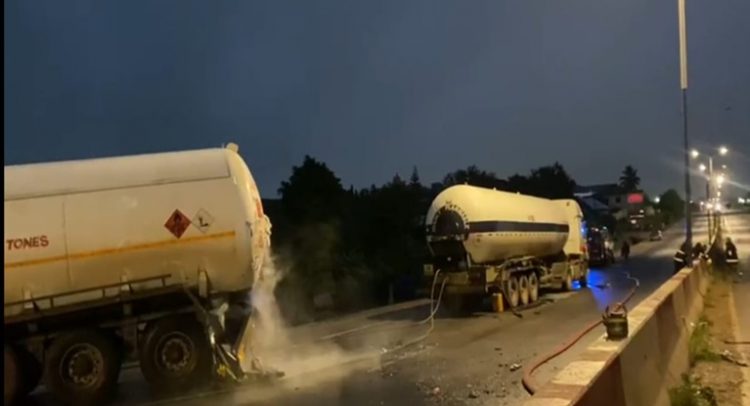 THREE PEOPLE are reported dead after a bus and a fuel tanker collided at Fumesua on the Accra-Kumasi highway around 1am on Wednesday.

The gas tanker, which was from the Accra direction, was initiating a curve to offload gas into a nearby gas filling station.

Suddenly, the bus, which was said to be travelling at a top speed, rammed into the rear of the gas-laden fuel tanker.

Unfortunately, two passengers, who were in the speeding bus, lost their lives at the accident scene while over 30 other passengers also sustained injuries.

According to eyewitness reports, virtually, all the people in the bus, which was said to be coming from Asante Mampong to Accra, sustained severe injuries.

One person, whose injuries were said to be life-threatening, sadly gave up the ghost at the hospital, where the injured were rushed to for medical attention.

Surprisingly, both drivers of the fuel tanker and bus survived the crash.

The matter was reported to the police who quickly dispatched personnel to the accident scene to remove the mangled vehicles from the busy road.

Meanwhile, other reports said the impact of the crash was deafening, so it attracted a sizeable number of curious people to the scene at that ungodly hour.

Some of the people offered a helping hand to remove the injured people from the damaged bus to the hospital for treatment.