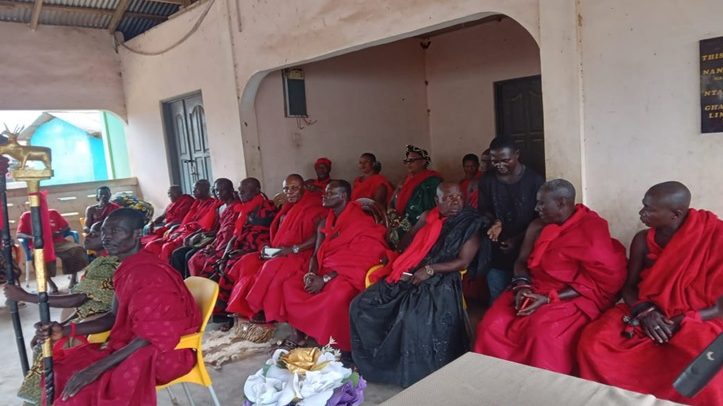 The chiefs at the press conference

THE CHIEFS and people of Cape Three Points in the Ahanta West Municipality of the Western Region have appealed to the government to fulfil its promise of fixing the deplorable roads in the area.

According to them, when oil was discovered at deep sea in Cape Three Points in 2005, the government promised to upgrade and reconstruct the deplorable roads leading to the area and surrounding communities.

However, the chiefs claimed that successive governments have failed to honour the promise and that the poor nature of their roads, was adversely affecting the local economy.

They asserted that the situation was worse whenever it rains, and that farm produce are left to rot in the farms because they could not transport them to market centres.

Addressing a press conference, Nana Bediako III, Chief of Elobonkanta, indicated that the people have been cut off from the rest of the country due to the poor nature of their roads.

He noted that there were several promises made by the government to fix the road before the 2016 and 2020 elections, but those promises had not been fulfilled.

“We have some companies including the Ghana Rubber Estate Limited that have properties in the area but they are not ready to assist with the excuse that they pay taxes to the government,” he noted.

“We met with the Western Regional Minister some time ago and he told us that the road has been awarded on contract and that construction will be completed in two years, but nothing has been done,” he asserted.

He said the youth in the area continue to blame the chiefs and opinion leaders for allegedly doing nothing about the situation.

“The young ones think that we the chiefs are not telling them the truth whenever we assure them that the government will fix the roads. But now we cannot control them again when things get out of hand,” he added.