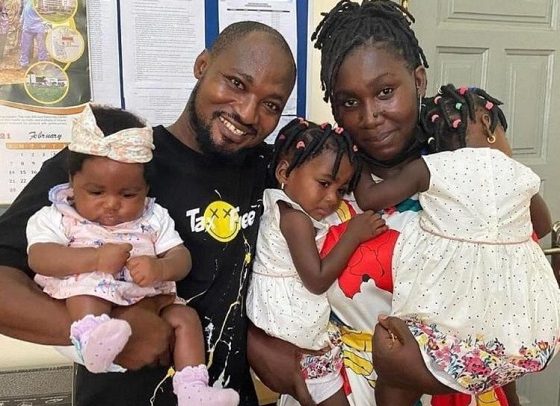 Ghanaian comedy actor, Funny Face has finally reconciled with his baby mama, Vanessa after she bolted with their children some months ago.

According to photos sighted by DGN Online, Funny Face was seen with one of his kids while Vanessa had the famous Ella and Bella on her thighs.

Rumors on social media have it that the two families met during the week to settle the pending matters between the two lovers and united them once again.

Some Ghanaians on Tweeter have also applauded controversial television presenter Mona Gucci after she made a suggestion to the two families to come together to resolve the marital issue between Funny Face and Vanessa.

Mona Gucci speaking on the United Showbiz program, said the actor did not need any psychiatrist to take care of him but needed the love of his children and the wife.

“Funny face does not need any psychiatrist but needs his children to come close to him, you will see the change. anytime I speak to him, release his life is centered on the children and wife” she said.

Funny face was convicted by a court after he was alleged to have displayed a gun in public during a scuffle with a young group in Kasoa.