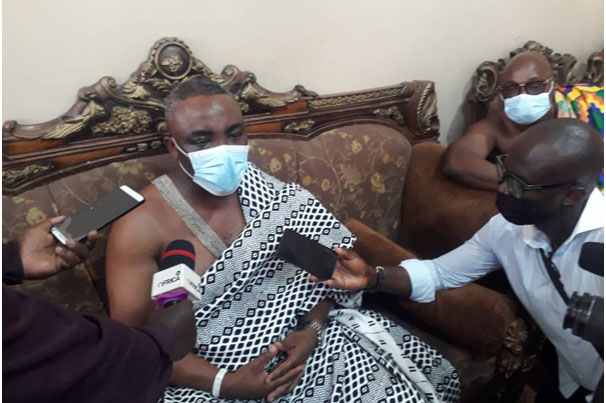 The new acting President, Nii Adote Otintor II speaking to some journalists at the ceremony

The Sempe Mantse, Nii Adote Otintor II, has been duly coronated as the new acting president of the Ga Traditional Council on Monday at the Ga Mantse Palace in Accra.

This followed the decision of the previous acting president, Nii Dodoo Nsaki II, the Otublohum Mantse to stand down from the position on health grounds and old age.

A committee was thus set up by the council where the tussle of appointing a successor was resolved.

Some chiefs and traditional leaders of the Ga Mashie paid homage to the new acting president at a colourful ceremony that was climaxed with a customary installation session amid the display of traditional regalia, drumming and dancing.

In an interview, the new acting president who happened to be Mankralo of the Ga State, proclaimed his acceptance of the position and pledged to work hard to resolve chieftaincy disputes and   improve quality of education of the Ga people.

“I am hopeful that by the time we celebrate Homowo, all the disputes would have been resolved. Not all disputes need to go to the court as we can resolve them through alternative dispute resolution mechanisms,” he said.

The former acting president, who has been at the helm of affairs for almost 12 years, explained that the president position of the council had alternated between quarters of James town and Ussher town.

And so, as an indigene of Ussher town, he said it was proper that the committee appointed someone from the Jamestown quarters of the Ga Mashie.

The council is made up of seven quarters that consists of Ngleshie Alata, Gbese, Abola, Asere, Sempe, Akumanjey and Otublohum.