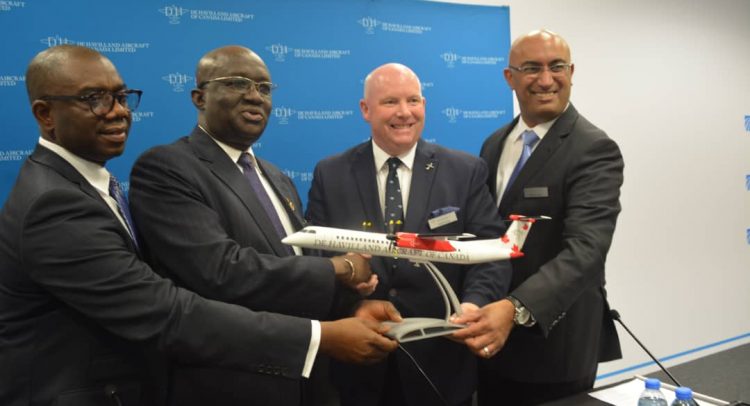 GHANA’S QUEST to re-launch a national airline company on Tuesday saw government officials signing a memorandum of understanding (MoU) with two aircraft manufacturing companies at the ongoing Dubai Air Show which comes to an end tomorrow.

The first of the agreements was with De Havilland Aircraft of Canada for six Dash 8-400 aircraft, while the second involved The Boeing Company for three 787-9 dreamliners.

Both deals were initialed by Joseph Kofi Adda, Minister of Aviation, on behalf of government.

The financing and remaining aspects of the two partnerships are expected to be finalized and presented to Cabinet for approval before these are submitted to Parliament for endorsement.

De Havilland Aircraft of Canada Ltd. is an aircraft manufacturer with facilities based in what is now the Downsview area of Toronto, Ontario, Canada. It stated on Tuesday that it had obtained 11 more orders for its Dash 8-400 plane at the Air Show, including the deal with Ghana, as it revives the recently acquired turboprop business from Bombardier Inc.

Chief operating officer Todd Young said in a statement, “The Dash 8-400 aircraft has been proving itself in the Middle East and Africa for quite some time and we feel that we are on the brink of even greater success.”

A tweet by The Boeing Company yesterday said it felt “honoured that the Republic of Ghana has selected the fuel efficient 787-9 Dreamliner to help re-launch their airline. We announced a letter of intent for three 787-9 airplanes and Boeing services during a ceremony today at the Dubai Airshow.”

Mr. Adda described the 787-9 dreamliner as an excellent aircraft particularly given its operational performance, fuel efficiency and passenger experience.

He said the carriers which would have Accra as their hub were expected to connect cities across in the West African sub-region and later fly to Europe, North America and Asia.

Noting that the new national airline was open to private investment and operation, the minister stated, “There is a growing demand for air travel to and from Ghana and we believe the advanced 787-9 Dreamliner gives us an efficient and flexible machine to launch a regional network and eventually serve international destinations in the future”.

Ihssane Mounir, Senior Vice President of Commercial Sales & Marketing for The Boeing Company, commenting on the partnership, said “we see the demand for air travel continuing to rise across the continent. Boeing is honoured to work with Ghana in helping to re-launch an airline to serve this vast market.”

He noted that Boeing looked forward to working with government on an integrated solution that included the 787-9 Dreamliner and aviation services to support the new airline, as well as provide superior experience for future patrons.

As the top U.S. aircraft exporter, The Boeing Company supports commercial and government customers in more than 150 countries. The company employs more than 150,000 people worldwide and leverages the talents of a global supplier base.

Last year, government signed an MoU with Ethiopian Airlines to fly the national flag in the aviation space in 2019.

The agreement, which is expected to be finalized before the end of this year, will witness Ethiopian Airlines contributing funding, equity, aircraft and management services, which are critical areas the airlines have expertise in. The government will receive 10 per cent of shares in the home-based carrier, while the majority shares will be for Ghanaian investors.