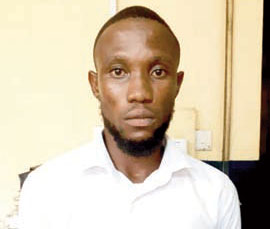 A 26-year-old Data Input Officer at the National Identification Authority (NIA) has been arrested by the police for attempting to register two foreigners during the ongoing Ghana Card Registration exercise.

Timothy Wuni would have succeeded in registering Alhassan Abdul Samed and Abubakar Ruali – both from Niger – but for the vigilance of his supervisor at the registration centre of the Abossey Okai Central Mosque in Accra.

He is currently in the custody of the Kaneshie District Police Command assisting in investigations.

Police investigation revealed that Wuni collected GH¢60 from a former staff of NIA to register the two foreigners for the Ghana Card.

“Wuni was immediately confronted by his supervisor, whose name is being withheld for now but when the two foreigner applicants realized that their cover had been blown, they fled the scene,” he said.

The supervisor called for the assistance of the police to apprehend him.

The police chief said “upon interrogation, suspect Wuni confessed that one Moro, whom he claimed was also a former staff of NIA, sent him mobile money token of GH¢60 to assist him to register the two applicants for the Ghana Card.”

DSP Tenge said the police had recovered two national identification forms which were filled by the two applicants from the suspect.

“We are currently keeping him in custody and would take him to court after investigations are over, but efforts are underway to get the two applicants to also face the law,” he added.