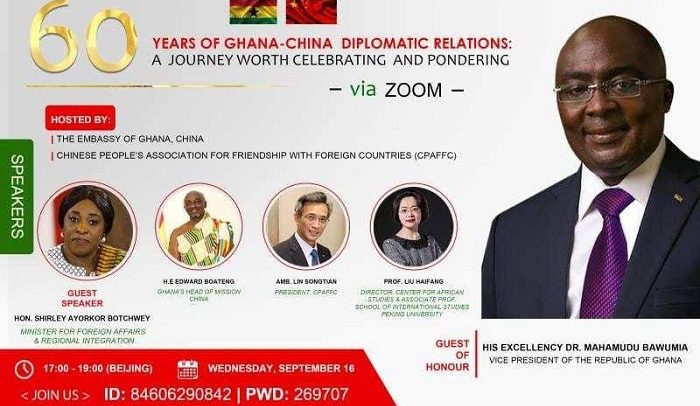 Vice President, Dr Mahamudu Bawumia has congratulated the governments of China and Ghana for sustaining a strong, exemplary relationship between the two countries over the last 60 years.

Delivering a keynote address via Zoom at a virtual symposium on Wednesday, September 16, 2020 to commemorate the 60th anniversary of China-Ghana relationship, Dr. Bawumia said personal friendship of Dr. Kwame Nkrumah, the first President of Ghana, and then President of China, left a strong foundation for the relationship between Ghana and China.

The founding fathers of the two new countries laid a solid cornerstone for the development of the bilateral ties.

Since the 1960s Ghana has provided substantial diplomatic support to China with China reciprocating with material support for Ghana’s development.

In the 1960s President Nkrumah lobbied for China’s reinstatement in the United Nations.

The then Ghanaian President also supported China during the Sino-Indian War in 1962.

During the Zoom symposium covered by DGN Online, Dr. Bawumia says over the years, the relationship between the two countries has been nurtured and strengthened by the successive governments of the two countries and their peoples.

He stated that under the leadership of President Akufo-Addo and President Xi Jinping of China, the relationship between the two countries has been more robust.

He recounted how Ghana was one of the advocates for the reinstatement of China to the UN.

Ghana, he stated, has for years, adhered to the one China policy.

In the economic trade and investment front, the two countries have deepened their relationship, he said.

According to him,
China was currently the largest investor in Ghana by the investment count.

The Vice President seized the opportunity to market the many investment opportunities in Ghana, especially in the area of one district one factory.

He spoke about the impact of coronavirus on the world and how it is going to affect how countries engage politically and economically.

Minister of Foreign Affairs and Regional Integration, Shirley Ayorkor Botchwey, in a statement, said since July 1960, Sino-Ghana relationship has grown from strength to strength.

She stated that the two nations continue to cooperate at the bilateral level.

More recently, the two countries have cooperated and offered each other support in the global fight against coronavirus, she said.

The symposium was held under the theme: 60 years of Ghana-China Diplomatic Relations: A Journey Worth Celebrating And Pondering.

South African Hit 'Jerusalema' Most Searched Song In The World