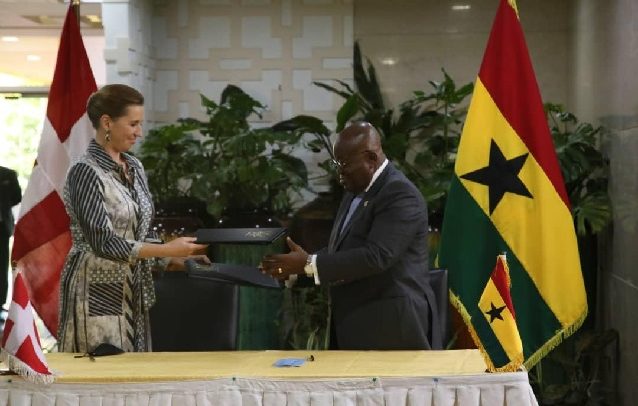 The two agreements are geared towards zero emissions in maritime transport, and water efficiency and conservation.

The visiting Prime Minister of Denmark, Mette Frederiksen, and President Nana Addo Dankwa Akufo-Addo initialed the agreements on behalf of their respective countries, after bilateral talks at the Jubilee House, Accra.

Denmark and Ghana have had active bilateral relations since 1958, with the European nation assisting Ghana with backing for economic development, peace and stability, health, transport, support to the private sector and the fight against poverty.

Ghana is an important partner of Denmark in West Africa and the broader region, concerning, especially, peace and security, including maritime security, economic growth and trade.

The visit of Ms Frederiksen to Ghana, the first for a Danish Prime Minister, coincides with the 60th anniversary of diplomatic relations between her country and Ghana.

Before the signing of the agreement, the two leaders affirmed their commitment to deepen the ties of friendship between their nations.

Recalling the longstanding relations between Ghana and Denmark dating back to the 17th century when the Danes first set foot on the shores of Ghana, President said, “‘Since then we have had our relations soar higher,” and both countries have had a lot working for them, which provided the basis for strengthening future relations. 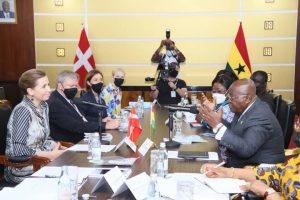 “I believe this visit of yours provides the basis for inspiring and igniting and consolidating those relationships,” he told the Danish Prime Minister

The President emphasised that the upcoming meeting between the African Union and the European Union, scheduled for next February in Brussels, Belgium, would provide the opportunity for leaders on both sides to discuss some major issues confronting the two continents, including job creation, climate change, and poverty, security, and Jihadist insurgencies in the Sahel regions.

He applauded the Danish Prime Minister for her contribution to the fight against piracy in the Gulf of Guinea.

He said everything possible should be done to prevent it, optimistic that the Brussels meeting would build synergies that would enable the region deal with those emerging security challenges, including the issues of growth and economic relations between Europe and Africa.

Ms Frederiksen, on her part, said Ghana and Denmark had a lot of historical ties and a lot of things both nations could address together in future, including climate change.

“We all know what is happening in your region because of climate change, poverty rate and migration statistics and it brings a lot of different problems with it. We need to respond to climate change both in Africa and in Europe and to build a stronger bridge between us when it comes to climate change,” she said.

She expressed her country’s readiness to help protect Ghana’s ocean, and address other issues such as security, poverty, and unemployment.

“I would like to congratulate you on all the efforts you have taken to fight COVID-19. You have been quite successful in your country. I am also glad that we have been able to help with vaccines because, of course, vaccine is our super weapon, no matter where you are,” she said.

As part of her two-day visit, the Danish Prime Minister, who was accompanied by Denmark’s opposition leader, Mr Jakob Ellemann-Jensen, will meet with Danish companies, Ghanaian Civil Society Organisations (CSOs) and explore the extensive water cooperation between Denmark and Ghana.

She is also expected to visit Tema to apprise herself with the city-cooperation agreement between Tema and Aarhus in Denmark, and the Danish Covid-19 response for UNICEF activities to improve water and sanitation.