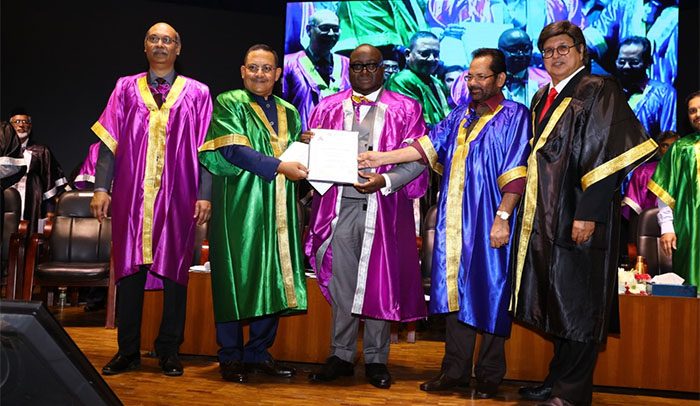 A scene during the ceremony

The B.S Abdur Rahman Crescent Institute of Science & Technology in Chennai – India, has conferred the Doctorate Degree of the “Doctor of Science (Honoris Causa)” upon Ghana’s High Commissioner to India, Michael A. Y. N. N. Oquaye (Jnr), for what according to them, is his Leadership role in the area of “International Affairs”.

The authorities also recognized his success in creating a new paradigm in the Indo-Ghana trade Relationship.

The Doctorate degree was conferred during the 9th Convocation Ceremony at the premises of the university’s campus with the Union Minister of Minority Affairs, Shri. Mukhtar Abbas Naqvi as the chief guest of the occasion and Chancellor Arif Buhari Rahman, who declared the convocation opened.

Others in attendance were his wife Mrs Maureen Oquaye, Head of Consular and Welfare – Mr Aaron Sintim, Dr Karthick Sridhar, Mr Yaw Kwakye, Ghanaian Phd. Students at Crescent, other Ghanaian students in the State of Tamil Nadu and many others.

In his acceptance speech he said he was overwhelmed by the gesture. That of over 150 missions in India he was singled for recognition, was exciting. Since assuming duty in India as high commissioner a little over two years ago, he said “my staff and I have made it a responsibility to take the mantle from our predecessors by deepening and expanding the traditional bonds of friendship between India and Ghana, especially increasing trade between our two countries and accelerate the rate of Indian foreign direct investment into Ghana.’

Noble Nketsiah, Others To Perform In US