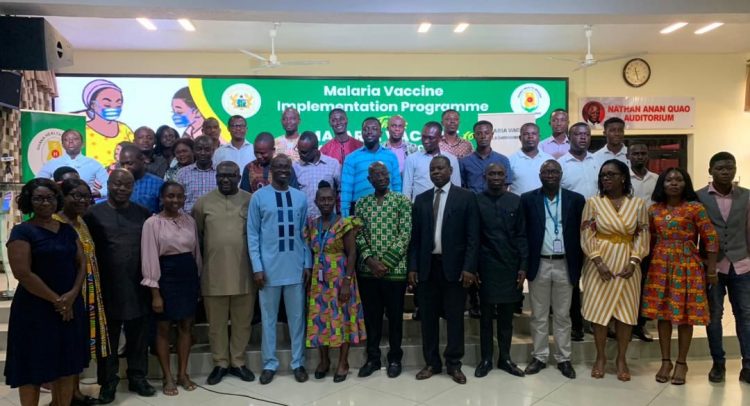 GHS officials and stakeholders at the event

The Ghana Health Service (GHS) through the Expanded Programme on Immunisation (EPI) has announced the expansion of the Malaria Vaccine Implementation Programme (MVIP) to 51 new districts.

Already, 42 districts in seven out of the sixteen administrative regions, are benefiting from the MVIP which started as a pilot in 2019.

The move, which brings to 93, the total number of districts under the MVIP, is to make way for its incorporation into the routine national immunization programme.

Director General of the GHS, Dr. Patrick Kuma Aboagye, who announced this at a press briefing in Accra said evidence from the pilot implementation revealed that the RTS, S malaria vaccine is safe and feasible to be incorporated into the routine immunization programme.

He explained that the implementation would be done in phases with the first phase,
involving the 42 vaccine introduction districts, being successfully completed.

He said the second phase is the addition of 51 new districts.

“Phase three would be the nationwide scale-up to the remaining 168 districts based on the
malaria burden and epidemiology as well as global availability of vaccines, from January 2024,” he said.

EPI Manager, Dr. Kwame Amponsah-Achiano said the malaria vaccine is given to children in four doses, starting from 6 months, then 7 months, 9 months, and 18 months.

He noted that the RTS, S vaccine has been safely given alongside other routine vaccines for over three years in the country.

“Over the last 30 years, scientists including those in Ghana have worked very hard to develop a vaccine that will reduce malaria disease and deaths among children. Through their hard work, over two million children who are less than two years of age have safely received the RTS, S malaria vaccine across Africa,” he said.

He urged the media to continue supporting the GHS to promote positive behaviours that will help stop the spread of malaria.

“Do use your medium to dispel rumours and misinformation while encouraging vaccine uptake. As important stakeholders and as role models, we encourage you to continue to advocate and create awareness on the devastating effect of malaria as well as the package of interventions available for malaria prevention,” he added.