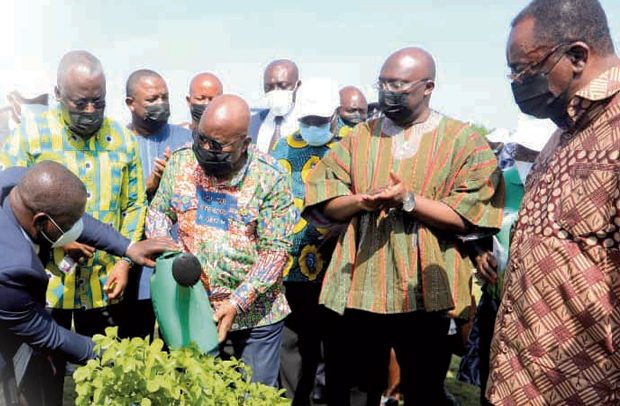 There was overwhelming participation by Ghanaians regardless of their social status in the nationwide exercise which saw the planting of more than five million trees across the country.

The President stressed the government’s determination to restore Ghana’s lost forest cover with a number of policy interventions, including the ‘Green Ghana’ project.

He said the interventions will include the regulation and sanitisation of the small-scale mining industry.

“We intend to enhance the ongoing afforestation programmes and see to the sustainable exploitation of our forest resources.

“I assure Ghanaians that the government is determined to ensure the survival of the five million trees being planted today,” he said, stressing “together we must protect our environment and ecosystem, to contribute to the world’s agenda of combating global warming.”

According to the President, the forest is one of the most important natural resources of Ghana as its continuous existence creates jobs, incomes for local communities as well as a source of foreign exchange through timber exports.

He, however, noted that the exploitation of forest resources for national development has never been sustainable over the years.

The President identified deforestation and forest degradation as the greatest challenges to sustainable forest management in the country.

The consequence of this, he said, has been the severe climate change which has brought dire effects on livelihoods, particularly the drying up of water bodies, the pollution of our waters, loss of prime timber species, loss of biodiversity and change in rainfall patterns and weather conditions.

He, therefore, said there is an urgent need to reverse the trend and restore forest resources to their original state as much as possible.

“As President of the Republic and Co-Chair of the Eminent Group of Advocates of the 2030 UN Sustainable Development Goals, I’m leading the nation today, 11th June, Green Ghana Day, to plant at least 5 million trees across the country as part of the master plan of Green Ghana agenda,” he pledged.

He thus appealed to all Ghanaians to embrace the Green Ghana initiative introduced by government.

The Minister of Lands and Natural Resources, Samuel Abu Jinapor, who was at the event, said his outfit has already distributed more than 5 million seedlings, including ornamental, fruits and economic trees like wawa, mango, teak, rosewood and shea to the districts and regional offices of the Forestry Commission and Metropolitan, Municipal and District Assemblies for the exercise.

He said the Forestry Commission had also marked out sites for the tree planting exercise which include backyards, open spaces, school compounds, residence and 100 metres away from roads.

Certain notable personalities who participated in the national exercise were the Speaker of Parliament, Alban Bagbin, who led some Members of Parliament to plant trees around the precincts of Parliament, the National Chief Imam, Nuhu Sharabutu, who planted a tree at the Kanda Central Mosque to mark the day, the Inspector-General of Police, James Oppong-Boanuh, who led some officers and men of the police service to plant trees at the National Police Training School at Tesano, army commanders and a host of others.

The Speaker Bagbin said trees are very essential in the lives of mankind and remain the biggest plants on the planet, stressing that their importance cannot be underestimated as “their functions expand to meet the needs generated by our modern lifestyles.”

According to him, he believes the GGP initiative is a special opportunity “for all of us to recover our time of loss in this area,” stressing that “by our own destructive practices, not only have we degraded the natural environment God gave us, but have also virtually depleted our forest reserves.”

From the Upper East Region, our regional correspondent Ebo Bruce Quansah reports that a total of 170,000 new trees were planted across the 15 districts and municipalities to mark the day.

Trees were also planted around some mosques as well as some water bodies and offices of the various district and municipal offices.

In the Western Region, our regional correspondent Emmanuel Opoku reported that the Regional Minister, Kwabena Okyere Darko-Mensah, defied a heavy downpour to plant trees at the forecourt of the Regional Coordinating Council in Sekondi to mark the ‘Green Ghana’ project.

He was joined by the Paramount Chief of Essikado Traditional Area, Nana Kobina Nketsia V and other prominent personalities in the region.

The Ahafo Regional Manager of the Forestry Commission (FC), Ntiamoah Bennett, after the exercise, urged the police and the citizenry to arrest any person who will destroy the seedlings and send them to the police for prosecution.

The Regional Minister, George Yaw Boakye, asked domestic animal owners to keep their animals in their pens and not allow them to destroy the seedlings.

“Ghana is fast becoming a desert, so let us all get involved to protect the forest cover,” he said.

FROM Charles Takyi-Boadi & Our Regional Correspondents

Ghana Gets $200m For Covid Vaccines

For Our Flora And Fauna