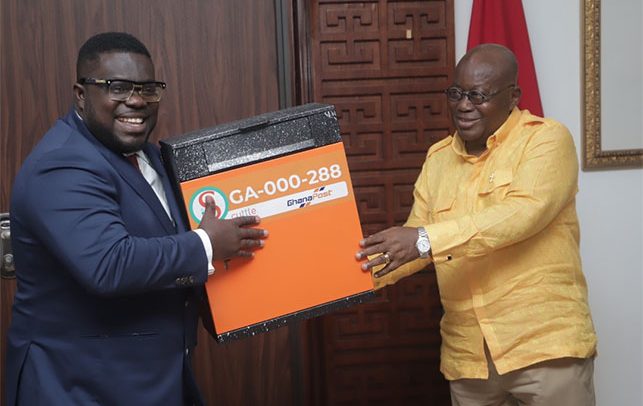 Management of Ghana Post Company Limited is lobbying the central government to channel its postal services through their means.

Managing Director (MD) of the Company and former President of the Musician Union of Ghana (MUSIGA), Bice Osei Kuffour, famously known as Obuor believes it is one of the safest ways to resuscitate the dying postal industry and the state-run company he heads.

At a meeting with President Akufo-Addo Thursday evening he made a passionate appeal to the government to come up with some policy arrangement as a matter of priority, to channel state postal business to Ghana Post as pertains in other jurisdictions.

This was when he and members of the Board led a delegation to him.

“Because of the transformation and digitization era, every organization goes through a certain change. Postal services are also going through the changes but it needs a certain core business, a certain base to thrive on the base so that it can propel its growth”.

In some of these jurisdictions (which the Ghana Post has studied), Obuor said the base has been achieved through getting business from the government.

He, however, noted that “if we look at our books, the portion of government business that Ghana Post receives monthly constitutes just about 3% of our total revenue.”

It is for this reason he said “it is our major plea that a government policy direction can come to our aid so that the Post Office can continue servicing itself, paying its staff and not rely on begging the government for capital injection.”

He also had cause to complain about some ‘legacy debts’ he said are posing a lot of challenges to the liquidity of the company, with an appeal to President Akufo-Addo to persuade government agencies Ghana Post owes to find a way to lift the pressure off their shoulders to help improve their spending capacity as an organization.

The debt which is in the region of GHc40 million includes that of the Ghana Revenue Authority (GRA) which is about GHc 8 million, with that of SSNIT at about GHc 5 million and end of service benefits owed old staff from 2016 up until 2021.

For these reasons, he said “we are unable to pay staff who go on pension because the organization does not have the liquidity to handle it and it is still hanging on our books.
But he was certain that “if we (Ghana Post) get business, we will be able to pay this ourselves.”

In the interim, he said, “what we are pleading for is if there could be a consideration to transform some of these debts to same government entities as additional equity or we find another way to capture it so that we can be a little liquid.”

President Akufo-Addo was optimistic about the possibility of reviving the Ghana Post again considering various measures being put in place by the management of the company.

He, therefore, described as a welcome idea the proposal for consolidation of government business to Ghana Post.

“I am not at all surprised about the changes that are taking place there (Ghana Post) and also the trajectory of your thinking. The consolidation of government business to Ghana Post is something that is feasible and the Minister is the main representative of the shareholder, I think she knows what to do to bring this matter up for consideration,” President Akufo-Addo said.

The President thus charged the Minister for Communications and Digitalization, Ursula Owusu Ekuful, under whose sector, Ghana Post falls who was present at the meeting to bring the request before the government for consideration and necessary action.

“I wouldn’t like to go further than that but to leave it to her to take the steps that would enable the government to consider this. It makes sense to me that instead of government paying private sector operators to do this necessary business, it should pay a public sector agency which it owns and controls to do the same business if the capacity is there,” the President added.