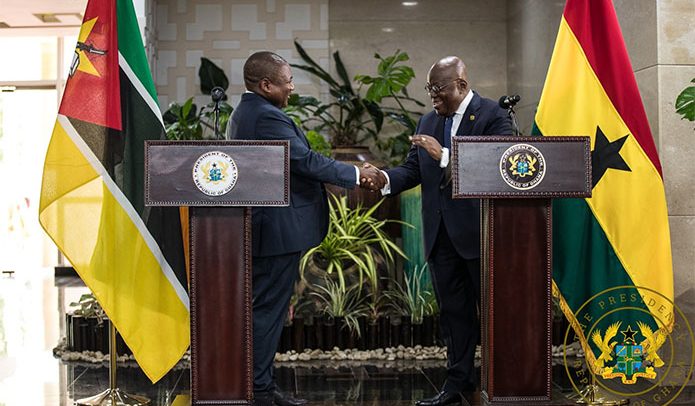 His visit has since culminated in the signing of some diplomatic agreements between the two countries, chief among them includes a visa waiver agreement which essentially removes the need for service and diplomatic passport holders to obtain visas before travelling to each other’s country (Ghana and Mozambique).

He called on President Akufo-Addo at the Jubilee House Monday with members of his delegation.

They also signed another agreement on general cooperation between their respective nations, Ghana and Mozambique.

At a press conference after the signing of the agreements, President Akufo-Addo said the relations between Ghana and Mozambique dated back to the struggle for freedom and independence from colonial rule, and that it was his hope that the visit of President Felipe Jacinto Nyusi will renew the bond of friendship.

“We are learning of valuable lessons from them and that is to develop the necessary infrastructure and resilient systems to mitigate any such devastating impacts in future and that no country can do it alone,” President Akufo-Addo added.

He thanked the government of Mozambique for supporting Ghana’s bid to host the secretariat of the Africa Continental Free Trade Area (AfCFTA) agreement, saying “the importance of the AfCFTA should not be lost on anyone, as its successful operation has the potential to transform the economic circumstances of the (African) continent.”

As a reciprocal gesture, President Akufo-Addo assured President Nyusi that, just as his country supported Ghana’s successful candidature for a non-permanent seat in the United Nations (UN) Security Council for the years 2022 and 2023, Ghana will be supporting Mozambique’s bid as well.

President Nyusi and President Akufo-Addo later visited the AfCFTA Secretariat in Accra and laid a wreath at the Kwame Nkrumah Mausoleum in honour of Ghana’s first President, Dr. Kwame Nkrumah.

As part of his visit, President Nyusi is expected to attend the African Development Bank Group (AfDB) annual general meetings, which has been taking place in Accra since May 23 and closes on Friday at the Accra International Conference Centre.

The meetings mark a return to in-person meetings following virtual gatherings over the last two years.

The theme of the African Development Bank Group’s 2022 Annual Meetings is: “Achieving Climate Resilience and a Just Energy Transition for Africa.”