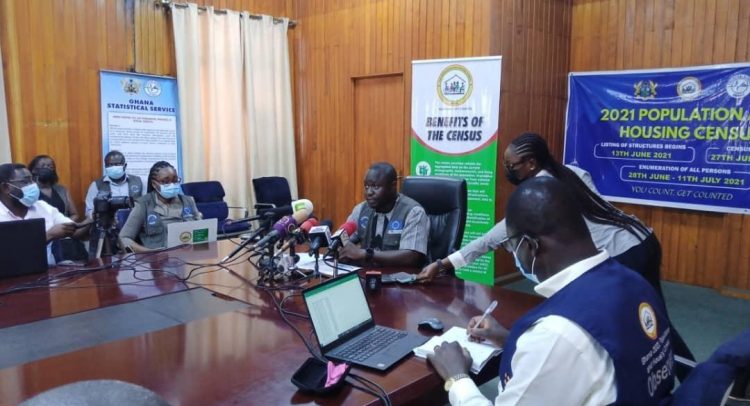 The Ghana Statistical Service has extended the data collection exercise in the ongoing 2021 Population and Housing Census (PHC) till Friday July 30, 2021 in selected areas to ensure that everyone is enumerated.

Government Statistician, Professor Samuel Kobina Annim, said the extension window of the data collection phase would afford enumerators the chance to reach an outstanding six per cent of Ghana’s population yet to be counted.

Prof Annim said this on Monday at a press conference in Accra to provide updates on the 2021 PHC.

He expressed appreciation to citizens for their sustained cooperation and enthusiasm in ensuring successful conduct of Ghana’s first fully digital census.

The Government Statistician said identification of selected areas for extension and its accompanying duration were driven by a number of factors, including calls received from citizens on their status and experience of the enumeration, departure from benchmark indicators and assessment of coverage and quality of data received so far.

He said the data collection exercise, which was originally scheduled from Sunday, June 27, 2021 to Sunday, July 11, 2021 led to the successful enumeration of 85 per cent of expected households.

Prof Annim said by the end of the sixth day of the initial seven-day extension from Monday, July 12, 2021 to Sunday, July 18, 2021, 94 per cent of expected households were enumerated.

He said in all 16 regions of Ghana, data collected exceeded three-quarters of expected data with all of them surpassing 90 per cent with the exception of Greater Accra.

The Government Statistician said to ensure quality work done by Field Officers, Management of GSS had mandated the conduct of spot checks in an entire enumeration area once a call was received from an individual who was yet to be enumerated in the area.

“This is done to count all other persons in that area who may not have reported that they are yet to be counted. In the process of spot-checking, verification and validation are done at three levels: firstly, all structures are listed; secondly, all households in structures are covered and finally, all household members are counted,” he said.

The visits, he said, would be done by Field Monitors wearing Field Monitor’s jackets branded with the 2021 PHC and GSS logos and carrying photo Identity Cards.

Prof Annim said GSS had also instituted outbound calls to selected members of the public for the same purpose of verifying information collected by Field Officers.

“Members of the public should be rest assured that the responses provided during enumeration are strictly confidential and the outbound call team only has their name and number. The team has signed an undertaking not to disclose any information obtained from the calls to anyone else. The information they record will be matched via serial number by the data analysis team for the verification,” he added.

He said the 2021 PHC aimed at achieving complete coverage and generation of quality data for decision-making, as such, no one would be left behind.

“To persons yet to be counted, please make yourselves available by using the call-back card or informing your neighbours when you will be available. Census Management is appealing to members of the public who are still unwilling to be enumerated to cooperate with Enumerators and get counted,” he pleaded.
GNA

JB Trial: All Testimonies; Written And Oral, Are The Same - Witness