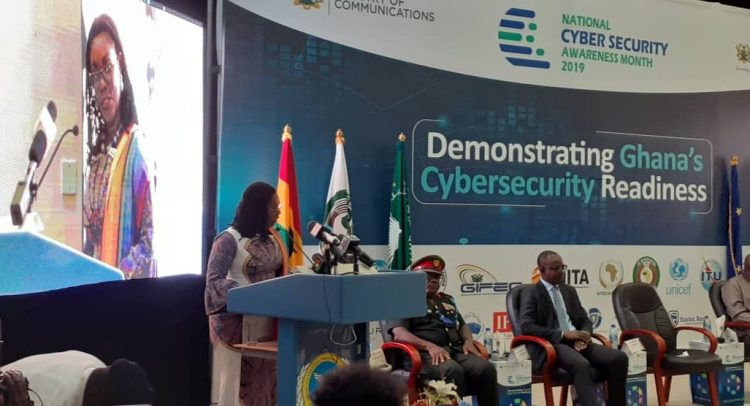 The Minister of Communications, Ursula Owusu-Ekuful, has announced that Ghana would soon criminalise the sharing of inappropriate social media content.

She cited sexual images as an example of inappropriate content.

The Minister has therefore urged that all should comply with the domestic laws, when passed, to avoid being penalized.

Mrs Owusu-Ekuful was addressing stakeholders on the second day of the National week celebration of the Cyber Security Awareness Month 2019, being held at the Kofi Annan International Peacekeeping Training Centre (KAIPTC), Teshie, Accra.

Dubbed: “Demonstrating Ghana’s Cyber Security Readiness,” the programme brought together security agencies, heads of departments, school children and others to discuss Child Online Protection (COP) and develop a framework to curb the risk posed to young people for using the internet.

The Minister said there would be sufficient provision in the law to protect children/adolescents from online abuse.

She, therefore, called on the public to be wary of such messages, delete as soon as they received them, and avoid passing them on.

The Ministry is working with the Attorney General, and Ministry of Gender, Children and Social Protection, among others to come-up with the framework on child online development and welfare within the shortest possible time.

Mrs Owusu-Ekuful said most children had become active users of the internet for learning but were unfortunately faced with a lot of challenges, which affected their human rights and, therefore, the need to protect them.

She said most of the laws of Ghana were enacted before child online protection came up, as a result, sufficient laws should be put in place to protect children being abused on the internet.

Government, she said, had increased awareness among children across all the regions and by the end of October, 40 schools would have been reached.

She said cyber security policy would be reviewed to meet international standards and called on corporate bodies to support government since it was their collective interest to protect the children.

Hajia Samira Bawumia, the Wife of the Vice President, said a collaborative effort was essential to protect children from online predators.

Quoting UNICEF’s research done in 2016, she said four out of 10 children had seen sexual images and half of the 2000 children used in the survey expressed online abuse by adults.

Hajia Samira commended the Ministry of Communications for initiating channels whereby victims who feared reporting to the police could report to seek redress.

“Parents have to be abreast of the use of the internet in order to guide their children on its usage as their children mostly knew more than them,” she advised.

Madam Anne-Clare Dufay, UNICEF-Ghana Representative, called on industry players to make their products child-friendly to prevent them from being taken advantage of.

Dr Albert Antwi-Boasiako, the National Cyber Security Advisor, said child protection issues needed a multi-sectorial approach where children themselves should not be left out of the solution.

Madam Afisah Zakaria, the Chief Director of Ministry of Gender, Children and Social Protection, called for the monitoring of service providers of sex sites to protect children from accessing those sites.

She said the law would soon be enshrined with strict penalties so that sending, retaining, and sharing of such contents would be punishable by law.