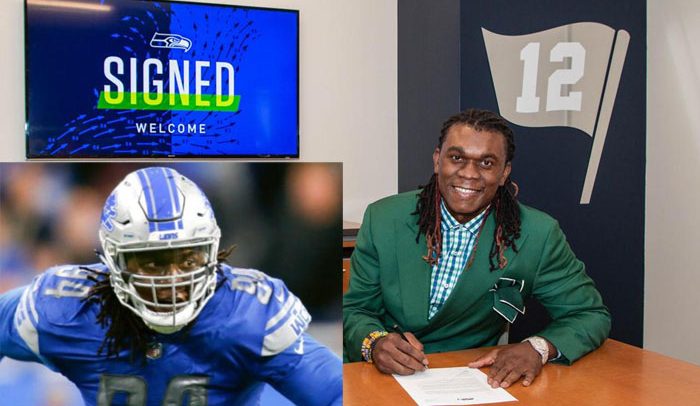 He said, “They’re going to see a vicious player,” the 2015 Pro Bowl defensive end with the Detroit Lions told the Seahawks’ website Friday.

That was after he signed his new contract with Seattle at its team headquarters in Renton.

The deal for the most accomplished and attractive free agent remaining on the NFL market became known Wednesday, one year, $5.5 million guaranteed with incentive bonuses that reportedly could earn him up to $8 million more.

They traded top sack man Frank Clark to Kansas City during an impasse in contract negotiations. Then, they did not take an outside pass rusher with any of their 11 choices in last month’s draft.

That left the faster, off-the-edge Ansah as Seattle’s top priority to sign.

“I’m super excited,” Ansah told the team’s website after signing his contract. “This is a great team. The caliber of players who have been through here, they have a great coach out here, the environment, the organization, it’s just great. I’m just happy to be a part of it.”

Carroll all but said Ansah’s name when asked after the draft about addressing his team’s pass-rush need that remained.

“We’re very involved in what is coming up next,” the coach said of post-May 7 free agency “We’re not done. We have work to do. We’re excited about what’s coming up, and you guys will see, in time.”

That time is now. Ansah had 48 sacks in 80 games with Detroit, including 14 1/2 in his Pro Bowl season of 2015 and 12 sacks two years ago. He’s the most attractive free agent pass rusher still available, two months after the market opened.

According to Sheil Kapadia of The Athletic, Ansah had a sack or QB hit on 10.4 per cent of his pass-rush chances in the 2017 and ‘18 seasons. That was the highest rate of any free agent in this year’s class.

“I am really motivated right now,” Ansah told the team’s website. “Not that I wasn’t motivated before, but I’m just super excited to be part of the Seahawks.”