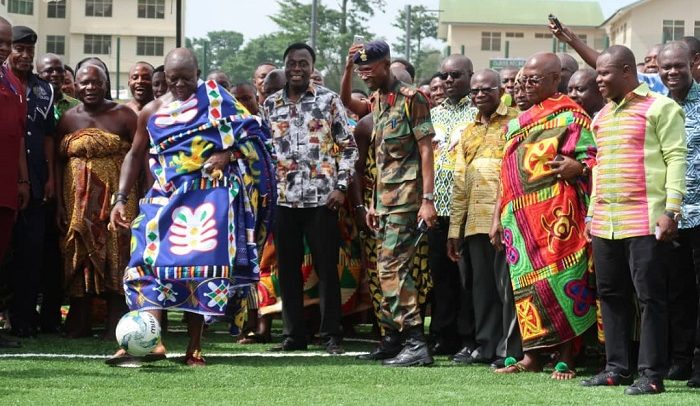 Otumfuo Osei Tutu about to take the penalty

It was during the grand opening of a sports complex facility at the Kwame Nkrumah University of Science and Technology (KNUST) in Kumasi.

Constructed by MMANAB Company Limited, a private construction firm in the country, the modern facility boasts of several sporting amenities.

For instance, the facility boasts of a spacious gym, which has a lot of training equipment, an astro turf, basketball and tennis courts and others.

The Asantehene, who is the chancellor of the KNUST, officially cut the tape to commission the facility, with support from other officials of the university.

As part of the grand opening, Otumfuo was asked to kick a penalty, and he did not disappoint, scoring at the end.

Displaying amazing soccer skills, the Asantehene planted the ball at the far corner of the post and sending the agile goalkeeper to the opposite side.