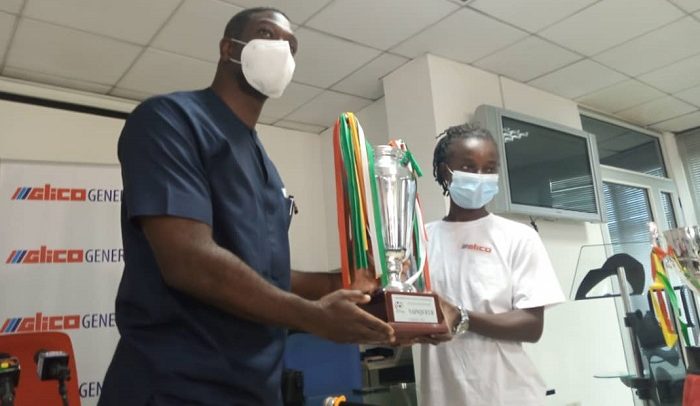 Janet presenting the trophy to the GLICO boss

Consequently, the team presented the trophy to the insurance giants (GLICO) at their head office at Adabraka  in Accra, last Thursday.

The team, led by team manager Nana Banyin Eyison, were received by the Managing Director (MD) of GLICO General, Andrew Acheampong Kyei and other senior officers of the company.

The GLICO General MD pledged to increase the GH¢150,000 his outfit gave to the team before the team’s departure for the competition, and also pledged a handsome package if they win the Champions League in November in Egypt.

He expressed his outfit’s readiness to support women soccer in the country and challenged Hasaacas Ladies to go for the ultimate in the Egypt championship.

The GLICO General boss later presented an undisclosed cash to the team, and the team in return expressed thanks to GLICO for their support.

The Hasmal Ladies Team Manager called for more support and promised that the team will capture the Champions League.

Captain of Hasaacas Ladies, Janet Egyir, on behalf of the playing body also expressed thanks to GLICO for the gesture.