GNFS Get GHC300K For Forensic Lab 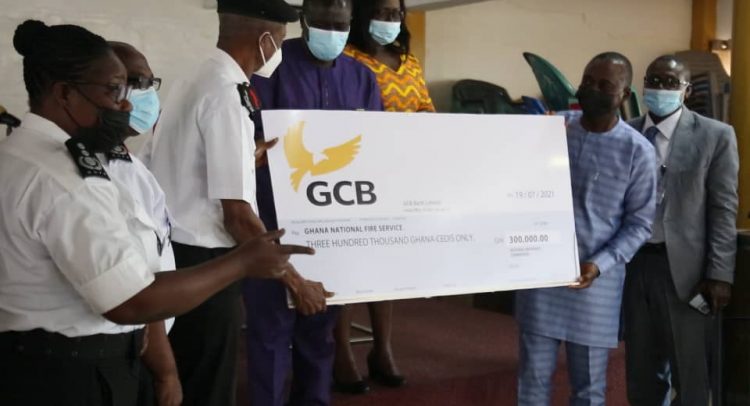 The National Insurance Commission (NIC) has presented an amount of Ghc300,000 to the Ghana National Fire Service (GNFS) to enable it to complete the construction of a 3-storey forensic laboratory at its headquarters in Accra.

At a brief ceremony held at the GNFS headquarters, Deputy Commissioner of the NIC, Micheal Kofi Andoh presented a cheque of Ghc300,000 to officials of the Service to support the ongoing project.

When completed, the laboratory will assist the GNFS to employ scientific methods to determine the origin and clear cause of fire incidents for public safety and education for the future.

The GNFS in recent times has been confronted with the challenge of incessant fire outbreaks occurring in many parts of the country notably markets and other places of large public gatherings, with the most recent incident being an inferno at the Makola Market Complex in Accra where it took a joint team of officers from the GNFS and the Ghana Army between seven to nine hours to douse the fire.

The project, being the first of its kind since the establishment of the Service in 1963, is single-handedly being funded by the NIC.

Receiving the cheque on behalf of the GNFS, Deputy Chief Fire Officer, Julian Kunnor remarked that: “With the establishment of a forensic laboratory, effective scientific methods will be used to identify the cause of incidence including a fire which will be merely classified as accidental and the true cause gone unnoticed”

Mr Kunnor also disclosed arrangements by the GNFS to send 50 fire officers to the Department of Forensic Sciences of the University of Cape Coast to undergo training in Forensic Studies with a Memorandum of Understanding (MoU) already being signed between the two parties.

He added that plans are also far advance to send 70 Officers with the support of the Government of Malta to undergo forensic practical training in Malta.

This, he intimidated, would help produce forensic professionals who would be deployed to all the regions to strengthen the Regional Investigation teams to provide a clear cause of fires and other incidents with scientific evidence.

On his part, the Deputy Commissioner of the NIC, Micheal Kofi Andoh, said the establishment of the forensic laboratory will assist the Commission to price fire risks properly.

“For us as Insurers, it will help us price the fire risks properly and also help us in our claims administration. Some people who have made fire claims before will tell you that sometimes the claims take long in coming and that is because they need to identify what caused the fire and I believe a laboratory-like this will make it easier and faster for us to do this”, he stated.

He went to assure that: “This collaboration between the NIC and the GNFS is going to continue hopefully until the laboratory is completed”