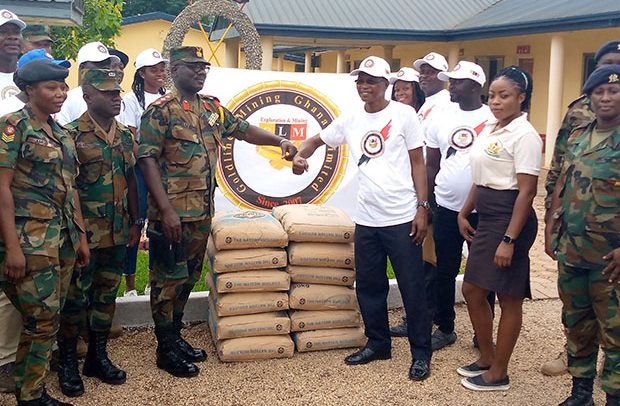 Col. Emmanuel Gyadu (left) in a fist to fist with Yaw Boakye Yiadom

GOLDLINE MINING Ghana Limited, a mining firm at Manso- Wahaso-Aponapon in the Amansie South District of the Ashanti Region, has donated building materials worth GHȼ19,000 to the headquarters of the Central Command of the Ghana Armed Forces (GAF) in Kumasi.

The building materials including 300 bags of cement and two tonnes of iron rods are to support the military command in constructing its 20-bedroom self-contained accommodation.

The Central Command is responsible for the command, control and administration of all the military units in the Ashanti, Ahafo, Bono and Bono-East Regions.

The two-storey building is designed to replace some of the wooden and dilapidated structures, which currently serve as places of abode for soldiers at the barracks.

Making the presentation at the project site, Yaw Boakye Yiadom, director of administration of the mining firm, said soldiers played important role in the security of the country and therefore needed to be motivated to be able to discharge their duties well.

The donation, he said, formed part of the company’s corporate social responsibility and fulfillment of a promise it made to GAF after it called on its management for assistance.

Mr. Yiadom urged all Ghanaians to ensure that soldiers in the country live in a comfortable accommodation to be able to execute their duties wholeheartedly.

Receiving the materials on behalf of Brigadier General J. A. Aphour, the General Officer Commanding the Central Command, Colonel Emmanuel Gyadu, Command Operation Officer, said the construction of the building was necessary to improve the accommodation conditions at the barracks.

He thanked the company for its act of benevolence and urged other philanthropic agencies and individuals to donate towards the successful completion of the project within a year.

Let There Be Peace