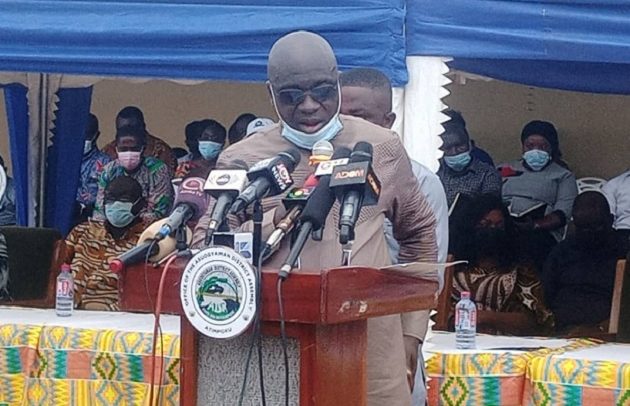 The Deputy Minister of Railway Development addressing the gathering

GOVERNMENT HAS assured the people of Akwamu Tradtional Area and communities along the route of the Tema-Mpakadan railway project of resolving all boundary settlements and payment of compensation to them.

According to the Ministry of Railway Development, government is in consultation with the Lands Commission and Lands Valuation Board to address issues with regards to land acquisition on right of way for payment of compensation to deserving people.

Some affected residents of Akwamu Traditional Area were said to be unhappy about the delay in the payment of compensation and acquisition of right of way as well as boundary disputes caused by the railway line.

However, speaking at a stakeholders sensitisation programme held for the people of Akwamu at New Akrade in the Eastern Region on the Tema-Mpakadan railway line to update them on the status of the project, Kweku Asante Boateng, the Deputy Minister of Railway Development, has asked the people to remain calm as government is taking steps to address all of their concerns.

He said his outfit is further taking steps to address some discrepancies identified in the Legislative Instruments concerning the right of way acquisition, noting that “We are in touch with Lands Commission to find lasting solutions to those issues.”

The Deputy Minister mentioned also that government is in consultation with Lands Commission to address the issue of boundary settlements so that “where the right of way is passing, is rightfully identified for the right compensation to be paid to whoever the compensation is due.”

Giving further details on compensation paid so far, Asante Boateng said the compensation payment have been divided into the three groups as government has finished with payment of compensation to farmers whose crops were destroyed in the course of the project.

He continued that government is also in the process of completing compensation payment to people whose structures such as buildings and other development were affected by the project, adding that “we are left with one or two people who are not happy about the amount which are supposed to be paid to them as compensation. I’ll find appropriate solution with all outstanding issues in this regard.”

The final part of compensation, Asante Boateng mentioned was with regards to land which he stated that steps are being taken to identify the rightful owners to commence payment.

He, therefore, called on the people of Akwamu and other communities to grant government the necessary support to complete the project which is about 80% completed.

According to the deputy minister, the project which is a Continental Line, linking Ghana and Burkina Faso, has been keen for government in order to improve trade along the West African sub-region.

Chief Executive of the Ghana Railway Development Authority, Yaw Owusu mentioned some challenges as result of improper documentation of lands in the area and encroachment on the initial railway line.

According to him, government is worming assiduously to ensure that the about 100 kilometres railway line begins operation by March next year.

Paramount Chief of Akwamu, Nana Odeneho Kwafo Akoto III, on his part, requested for all outstanding compensations to be made to affected people for peace to prevail.

He further asked for construction of pedestrian walkways along the highway to avoid people using the rail line, after expressing his displeasure about attitude of some of the expatriates working on the project towards his people.

Traders In T’di Lament Lack Of Space At New Market