Traders In T’di Lament Lack Of Space At New Market 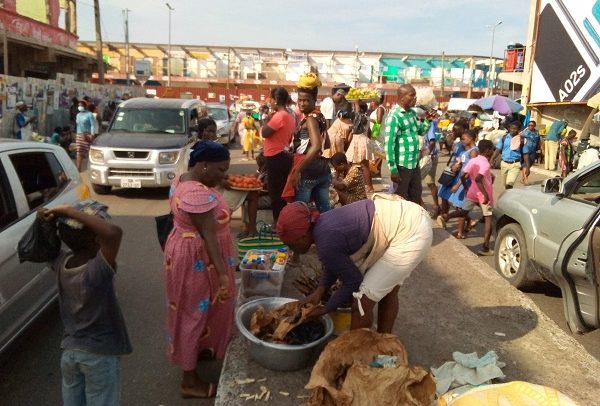 Traders have taken over pavements and walkways around the old market

In spite of the incessant calls by the Sekondi-Takoradi Metropolitan Assembly (STMA) on all traders at the Takoradi Market Circle to move to a new market, some of the traders continue to do business around the old market.

The STMA initiated a move to close down the Takoradi main market to all forms of trading activities on Monday, May 3, 2021, to pave way for the redevelopment of the old market.

The over 90-year-old Takoradi Market is being redeveloped in fulfilment of a promise made by the current government.

The assembly explained that the directive to the traders to move to the new market was to enable it to hand over the old market to the contractor for commencement of the redevelopment works.

However, when DAILY GUIDE visited the Takoradi Market Circle over the weekend, it was revealed that some market women and other traders were still trading around the old market.

It was revealed that all the streets around the old market and walkways have been taken over by traders, making movement around the area very difficult.

Speaking to DAILY GUIDE in separate interviews, some of the traders asserted that they have not been given shops in the new market so they have no option than to sell on the walkways.

They also claimed that the new market lacked the requisite infrastructure including electricity, water and toilet facilities among others.

Meanwhile, the Mayor of Sekondi-Takoradi, Abdul Issah Mumin, insists that the traders were not being truthful.

He maintained that a good number of the traders selling on the walkways are refusing to sell in their allocated shops.

He warned that traders who have come onto the road and walkways to trade even though they have been allocated shops at the new makeshift market will have their shops reallocated.

He said, “Almost everyone has been given a shop or a shed inside the main areas. But what I have observed is that most of them have moved from their sheds and shops and have come onto the roads to trade.”

He continued, “They are selling on the roads because they believe that is where they will ‘catch’ the customers.”

He lamented that the activities of the recalcitrant traders are causing nuisance at the old market.