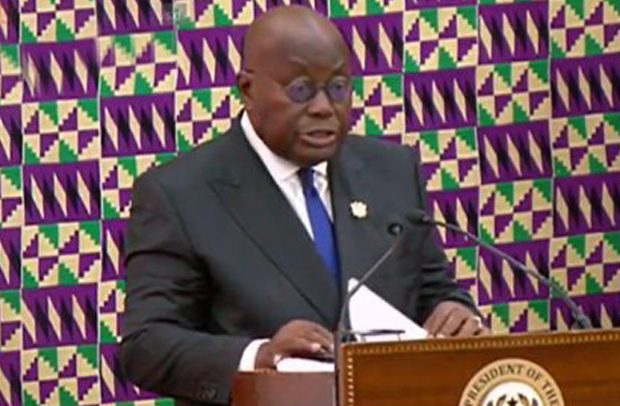 President Akufo-Addo has stated that his government is still committed to improving the creative arts industry in Ghana.

He made this known at the 2020 State of the Nation Address (SoNA) on Thursday when he touted some of his government’s achievements in the sector.

In December 2019, the President inaugurated the National Film Authority (NFA) and sworn in members of its governing board with the aim of putting the Ghana’s film industry on the global maps.

The Chairman of the NFA is David Dontoh. Other members include Juliet Yaa Asantewaa Asante, Executive Secretary of NFA; Yaa Attafua, a representative of the Copyright Office nominated by the Attorney-General & Minister of Justice; Josephine Ohene-Osei of the Ministry of Tourism, Arts & Culture; Dora Darkwa-Mensah of the Ministry of Communications, Dr. Samuel Anyetel Nai of the National Film Television Institute (NAFTI) and Samuel Fiscian of the Ghana Actors’ Guild.

NFA is one of government’s measures to support the creative arts.

According to President Akufo-Addo during his address, the creation of the NFA is a step in the right direction to turn around the film industry for economic development.

“We are committed to the industry,” he stated.

“We are commencing the construction of the very first senior high school in Ghana dedicated sole to the development of the creative arts industry. I cut the sod for this construction in Kumasi in December last year, we are determined to do more,” he added.

The President’s State of the Nation Address before Parliament is in accordance with Article 67 of the 1992 Constitution, which requires the President to brief Parliament about the country’s state of affairs.

He spoke on diverse sectors of the economy, including the ‘Year of Return’ programme which provided favourable international media coverage for Ghana and had high-profile international celebrities also visited the country.