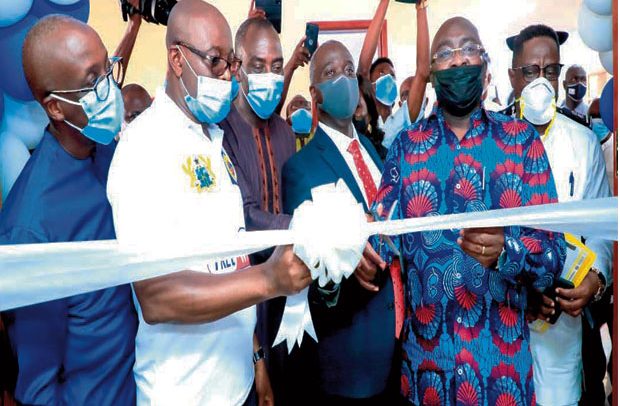 The Akufo-Addo-led New Patriotic Party (NPP) government has fulfilled its promise to provide free Internet (WiFi) services in the various universities in the country.

Yesterday, Vice-President Dr. Mahamudu Bawumia launched the Free WiFi service at the Dzorwulu campus of the Ghana Institute of Journalism (GIJ) in Accra.

The project which is being piloted is now connected to 13 universities at the cost of over US$11 million.

It is being facilitated and implemented by the Electricity Company of Ghana (ECG) leveraging on 650 kilometres of its Fibre Optic Network, in collaboration with the National Information Technology Agency (NITA), Ghana Grid Company Limited (GRIDCo) and Northern Electricity Distribution Company Limited (NEDCo).

The Free Wi-fi pilot project will also connect Internet to the ECG’s district and sub-stations along the Fibre Optic Network.

Meanwhile, efforts are being made by government to connect the campuses of the University of Energy and Natural Resources (UENR), Sunyani, and University of Development Studies (UDS), Tamale, in the northern sector of the country, as well as all the public technical universities and teacher training and nursing training colleges to the service.

Vice-President Bawumia lauded the management and staff of ECG and partner institutions for making the government’s vision of connecting free Internet service to the public universities a reality.

He said piloting the project at the 13 public tertiary institutions would help the implementing agencies and government to identify any unforeseen challenges ahead of rolling out Free Wi-Fi service in 722 public senior high schools (SHSs) and 46 colleges of education across the country.

Dr. Bawumia announced that 80 per cent of work on connecting the SHSs to the free Internet service was completed.

He was of the belief that the project was a game-changer in the academic community, which would enable students and lecturers alike to teach and learn in a conducive environment in developing the country’s human resource base.

The Vice-President, who performed the launch, said “the can do spirit” exhibited by the ECG had rekindled public confidence in the leadership of ECG and would go a long way to accelerate the socioeconomic development of the country.

He recalled how it all begun in April 2019 when he asked the Electricity Company of Ghana (ECG) to leverage on its fibre optic infrastructure to support government’s digitization agenda.

“When I made this request to ECG, ECG said they would get back to me; and with the support of the Minister of Energy, John-Peter Amewu, the ECG’s Board and management it has happened,” he said, while paying homage to them, saying “I am so proud of them.”

“They thought outside the box and so they took up the challenge and they came back and said we think we can do it,” he recalled like yesterday.

On his part, Mr. Amewu lauded the ECG and its partners for the yeoman’s job in making the Free Wi-Fi a reality.

He, however, cautioned the ECG that while it was making arrangements to commercialize the Internet service to other private companies, it should not renege on its core mandate of distributing affordable and reliable electricity to Ghanaians and all power consumers.

The Rector of GIJ, Professor Kwamena Kwansah-Aidoo, was full of excitement for connecting the premier journalism institution in the county to the free Internet service.